There remains history untold and places unexplored across the globe. There remains cities with glory trapped under water with clear sculptures dating back to the pre-historic days screaming of the victory in bloodshed wars.

Or maybe some, which have been swept off by earthquakes or natural calamities and now remains the sculptures, statues and coins in a barren land amidst the eyes of the tourists and historians to dive in deeper to history!

In short, ancient cities which no longer exist and cities trapped under water give us a terrific feeling, indeed! It is also a thrilling job for the divers and archaeologists to detail and pen down the studies in detail for exploring the virgin history!

Must Read : Underwater Railways and Tunnel – Everything You Need To Know

There are several cities which are now submerged in water, but have left their remnants deep under long sea depths in the ocean, only to be discovered later as a delight to history! Had these cities remained with us, more cultures, tradition and possibly inventions in digital and technical aspects might have seen the day. Like each site has their own expertise, Japan in technology, Dubai in gold and oil and lots more.

Below are the top 10 ancient underwater cities in the world which have been discovered till date among the many, but have not seen the modern era:

The mystery is gradually unveiling from deep under the ocean, which states that it was once a trading centre and a port. About 60 shipwrecks have been found alongside, with coins, sculptures, anchors and tablets inscribed in Egyptian and Greek.

These were supposed to adorn the nearby temples. Heracleion is said to be excavated nearly after 1200 years under water and is situated alongside the Mediterranean. A massive earthquake is said to be the reason why the city could not see the modern times. 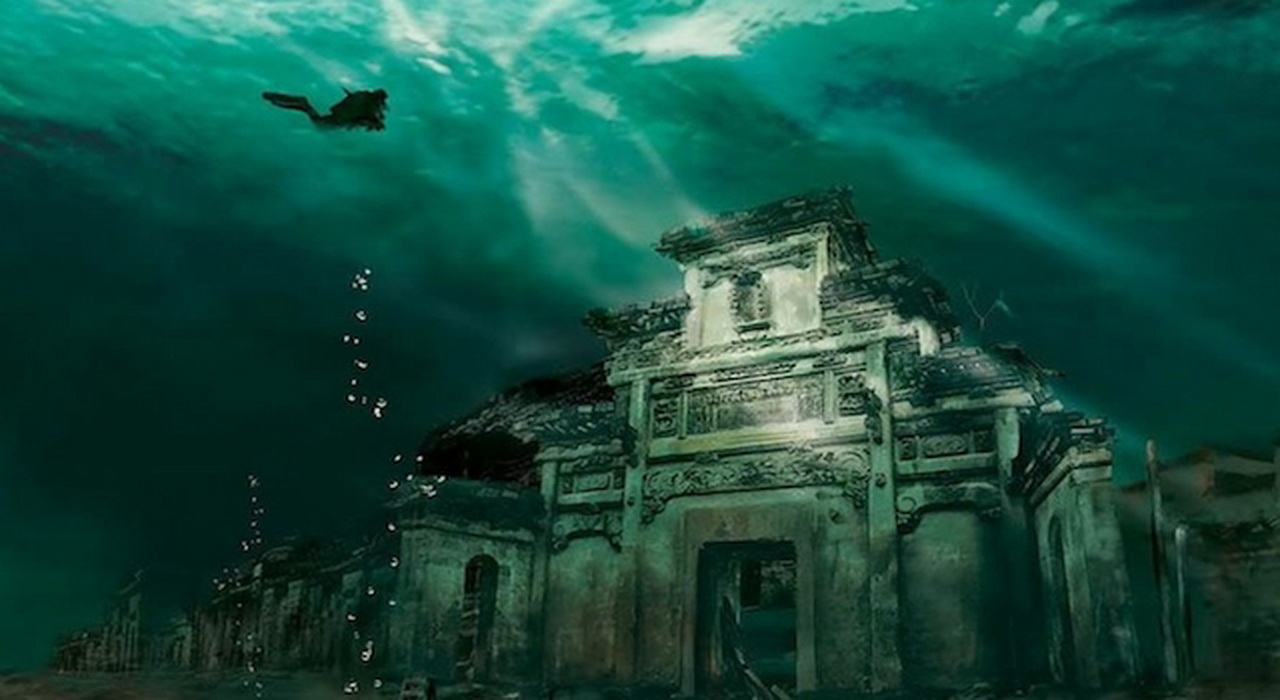 Kaveripoompattinam was a throbbing port city while Poompuhar was the capital during the reign of the Chola dynasty. The history and significance of Poompuhar is all about the Sangam-era epics of Tamil literature, Silapathikaram and Manimekalai! As it was situated at the mouth of the Cauvery River, it is believed that the city got washed away by a powerful sea-storm and was heavily eroded in around 500 AD.

The National Institute of Ocean Technology conducted surveys around the area in 2006 to reveal the submerged remnants of the flourishing city. The historians have identified ancient wells, coins, statues and sculptures of Lord Buddha which are well preserved and this is one of the biggest reasons why the place holds utmost historical significance to the travelers. 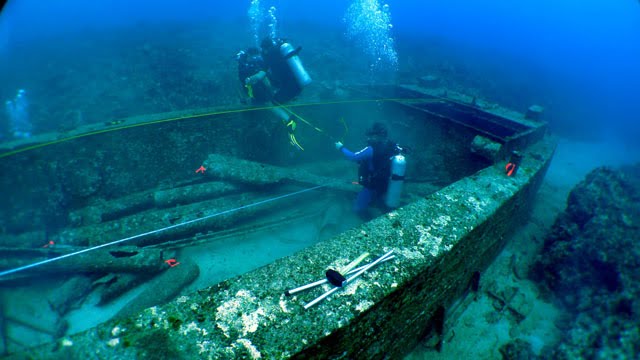 Know more about the Golden Chariot

Located in the Kingston Harbour, Port Royal is said to be the consort of the pirates and privateers, like prostitution, gambling etc! The city is known to have been comprised of 4 forts and about 2000 buildings. Hit by a massive earthquake in 1692, the city sank under the Caribbean. Port Royal was built on silt and hence the earthquake struck hard and it could not see the light of the modern era, is what the historians believe. 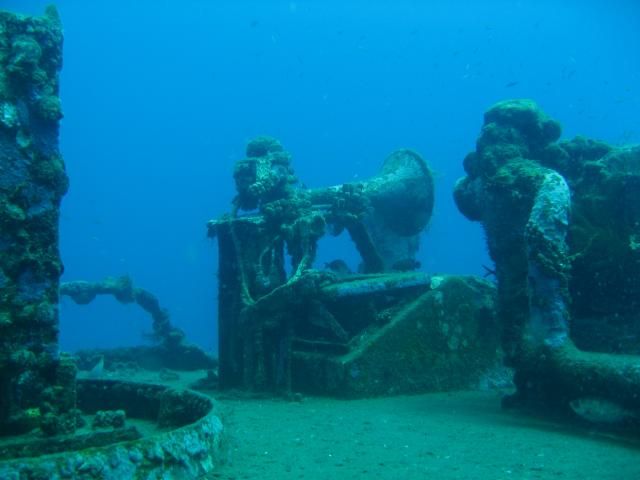 It is absolutely surprising to see the structures in Shi Cheng which represents Chinese sculptures constructed around 1300 years back, remaining absolutely intact and fine. The credit goes to the absence of dusty winds and sun rays as these are submerged under water.

Shi Cheng was a city in China, known for exquisite white temples, arches, paved roads and houses alongside thus painting a picturesque setting. It is thrilling to imagine such a beautiful city submerged 130 feet in water! The then called Lion city was the centre of economics and politics in the eastern province of Zhejiang. The city has been purposefully built under water with a man made lake in 1959 to produce hydroelectric power. 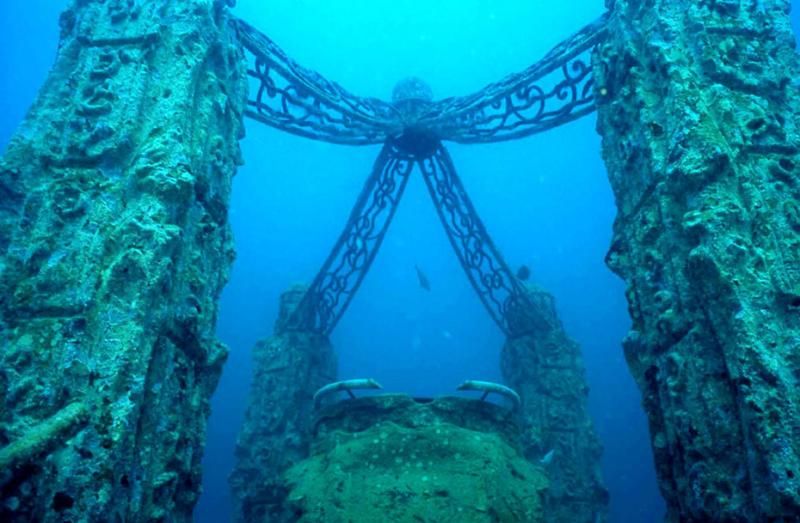 A UNESCO World Heritage Site which is situated on the banks of River Malaprabha, is known for the amazing scriptures of Lord Shiva and a Jain sanctuary. Noteworthy is the Temple of Virupaksha constructed by Queen Loka mahadevi to celebrate the victory of her husband over the Pallava kings of Kanchi.

The remains of Sangameshwar temple, Mallikarjuna temple and other historical remains also present the ancient Vesara style of temple architecture. Even though the city is no more but the amazing creations remain to remind us of the glorifying wars and victory. Doesn’t it feel a little patriotic? 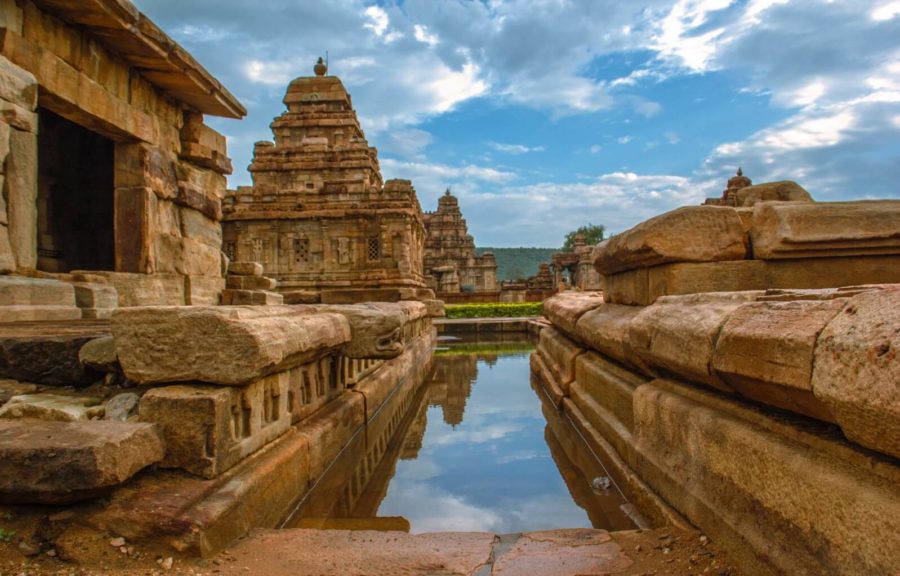 Yet another historically significant and a widely popular tourist destination is Sarnath which is famous for the deer park. Lord Buddha first preached Dharma here at Sarnath and this is where the Buddhist Sangha was initially formed. This is one of 4 major Buddhist pilgrimage locations across the globe and is also known as Isipatana.

Important Buddhist scripture you should not miss is the Dhamekha Stupa, constructed by Emperor Ashoka in 249 BCE along with the Buddhist scriptures built around the same time. Buddhism is said to decline and Sarnath disappeared with the invasion of the Muslim invaders in the 12th century. It was however rediscovered by the archaeologists of the British reign in 1835 and now what we explore is nothing less than our glorifying past! 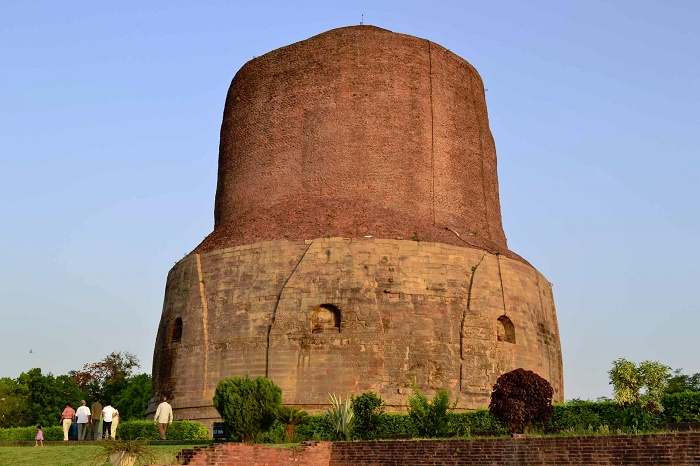 An important trading hub of black pepper which gave the Rome a tough competition and even led Rome to debt! It is said that the travelers in the historical days would arrive with gold and leave with pepper! Today the Muziris Heritage Project happens to be one of the largest archaeological projects in the country.

Along with being an important spice trading centre in the country, the historians have discovered many remnants and artefacts about Egypt, Yemen, Roman and West Asia here. 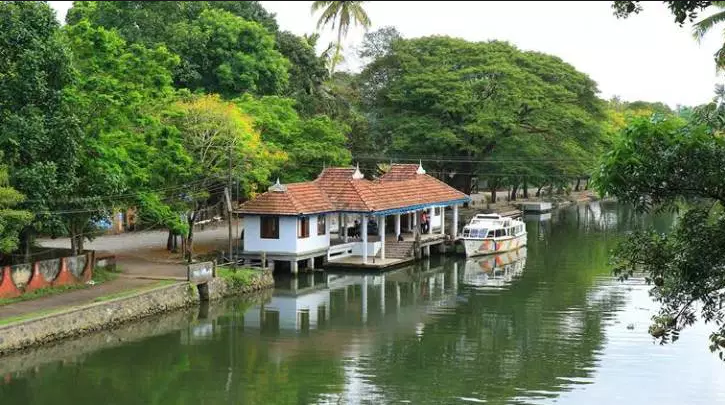 Situated on the Khadir island of the Rann of Kutch, Dholavira happens to be one of the five largest Harappan cities in Asia. Dholavira was once a throbbing city which survived for about 1200 years and also had easy access to the sea level.

However today, the throbbing and lively city just remains to be remnants on an arid land! With research and excavation, the intelligent planning mechanism of the architecture has been unveiled with reservoirs, step well, seals, beads, animal bones, gold, silver, terracotta ornaments and vessels. Did you know, Dholavira used Rain Water Harvesting? 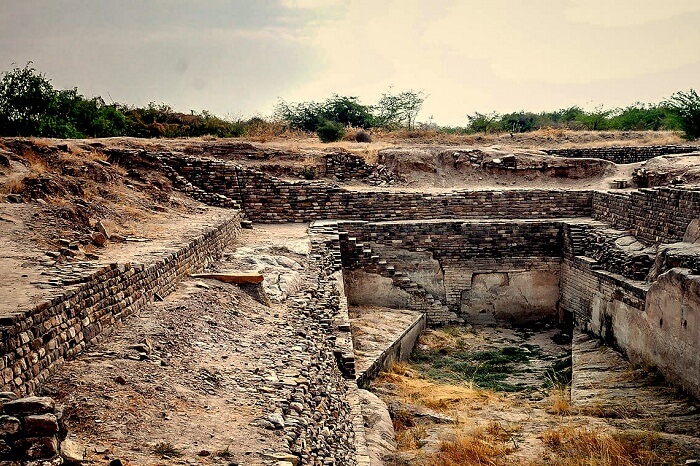 A port city of Sopara under the reign of Bahadur Shah, the Sultan of Gujarat was known as Bajipur by the Marathas, Bassein by the British, while the Portuguese named it Baçaim when they took it from the Sultan if Gujarat. They transformed it into a magnificent fort and into a port city in two centuries. Vasai happens to tell the story of the modern Mumbai through its churches, mosques, temples, tiny villages, beautiful beaches, hot water springs and most importantly, the replica of the Sanchi stupa.

More than 30 years ago, Villa Epecuen, the spa town of Argentina got swept off by a massive flood of the raging Lake Epecuen. The city remained under waters for about 25 long years until 2009, when the waters began to recede.

In 20th century, when the remnants of the flood was found out by the researchers, the city’s precious minerals were mined to be used in glass and for medicinal industries in the country. 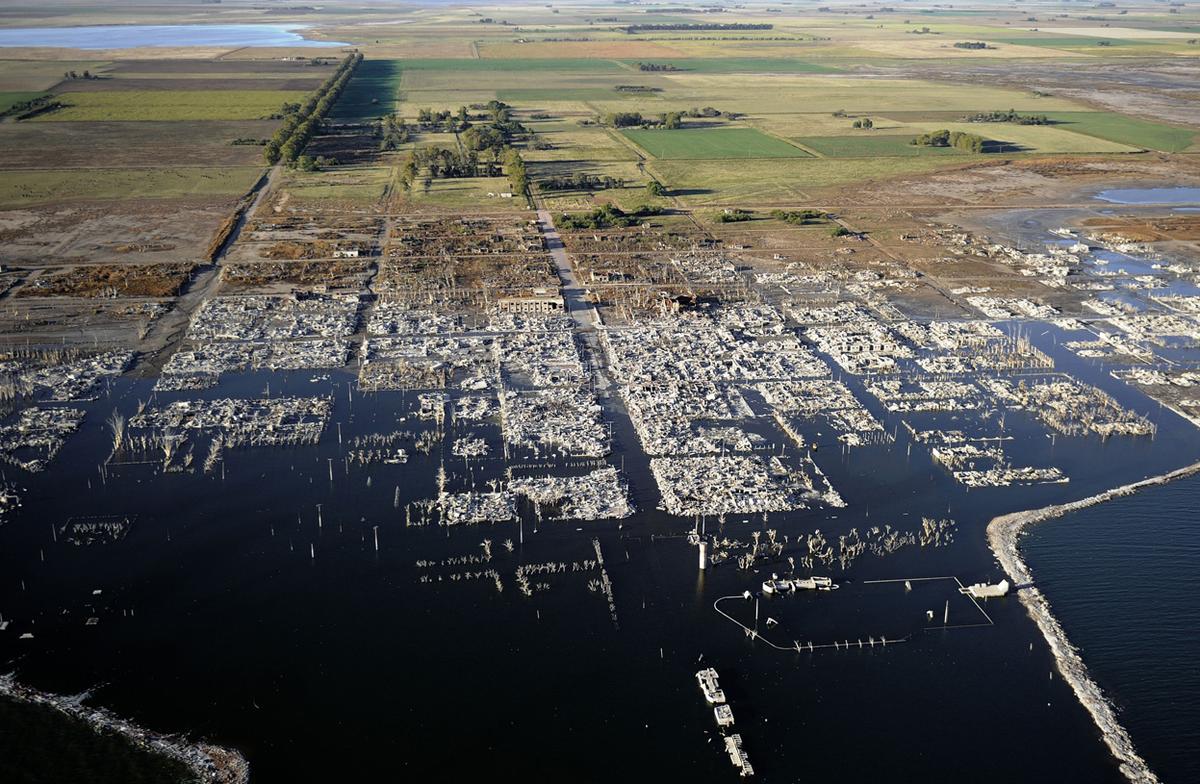 Noteworthy is to mention that the sulphates were sold to the common people so that they could experience thermal bath at their residence. Dating back to the floods, the lake here resembles the Dead Sea and is one of the reasons of flocking tourists. The lake water, rich in minerals is said to cure skin conditions and diabetes.

Even after 30 years of the tragedy, the residents and survivors of the calamity have still not been able to recover completely from the flood which swept away life overnight! Nobody died but the psychological turmoil of the elder survivors is what still remains after 30 years!

The natural calamities like floods, earthquakes and storms have washed away massive and life throbbing areas and cities overnight. It definitely sounds thrilling to excavate the historical findings of the bygone era, while those on the lands are some of the most happening travel destinations and photographer’s paradise. The ones under the ocean waves are still being studied by the divers and some of them have also opened up for the tourists to be explored under the sea!

Exploring the virgin, knowing the unknown and a traveler’s guide can be no better than exploring these ancient cities no longer lived by! What remains is the historical findings with amazingly intelligent scriptures and sculptures, which leaves us in awe! How could they even imagine the mechanism thousands or hundreds of years ago? Had the cities remained, who knows we might have been exposed to even smarter and better digital and technological ways! This vacation, go on a thrilling venture on a mission to the most ancient cities! So which destination did you pick to begin the adventure with?