Maharajas' Express Train is a World's Leading Luxury Train introduced by Indian Railways catering and Tourism Corporation (IRCTC). Popularly known as the Indian version of the ‘Orient Express of Europe’ the World’s Leading luxury train - Maharajas' Express made a debut in the year 2010. The luxury train has ever since won several & consecutive prestigious annual world travel awards.

One can experience a magnificent luxury tour in ancient palace style on the Maharajas' Express. The journey is sure to enchant you as the luxury carriages carry you through the most scenic places. It offers four interesting itineraries to help you see historic monuments and structures. The royal tours on Heritage of India, The Indian Panorama, The Indian Splendour and Treasures of India make you experience the royal ambience on the tour. These tours throw light on the rich ancient heritage which is seen around various places throughout India even today.

The journey helps you visit UNESCO World Heritage Sites, pass through wildlife parks, taste royal culture of ancient rulers in India in the historical monuments and palaces. There are also traditional folk dances and performances to entertain you at some of the destinations. While traditional warmth greets you at arrival, royal hospitality sees you through the rest of this palatial journey. Each carriage is designed in such a vibrant way to give you the feel of being in a palace.

There are 23 total carriages to treat you to royal luxury. It not only caters to your basic needs in full royalty and traditional hospitality but keeps you from boredom. You can have you quiet evening time or relax with a book in the peaceful lounge. What’s more is that you can shop from the onboard souvenir store. You can taste the wide spread lip smacking cuisine from fine dine cutlery in dining cars. Chill out at the bar where you are served beverages and spirits of international brands.

The large windows help you view the journey as the train cruises through sub-urban landscapes. Travelling on the luxury train is like a journey to the bygone era. The luxury train has won several noted awards including back-to-back award from the year 2012 to 2018. “The World's Leading Luxury Train” was awarded to The Maharajas' Express at the World Travel Awards. As your journey ends here, you get a farewell cheerful goodbye while you carry on the luxurious experience in your memories forever. 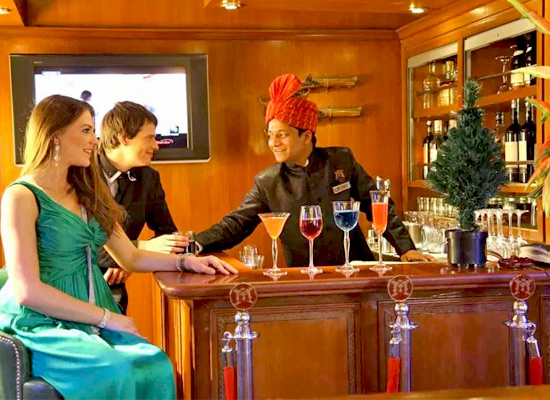 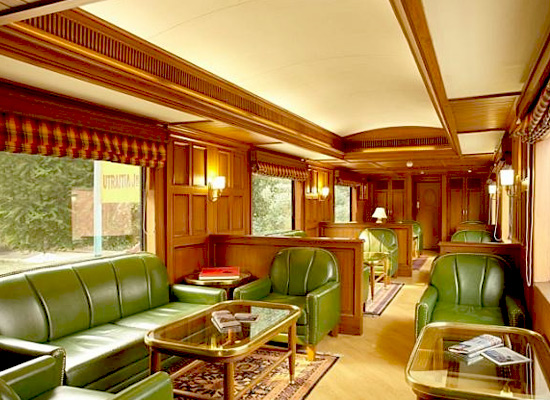 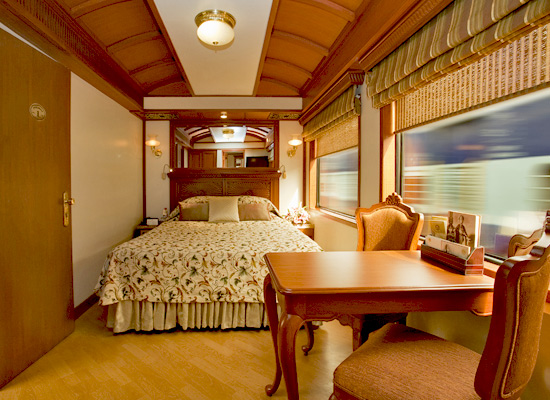 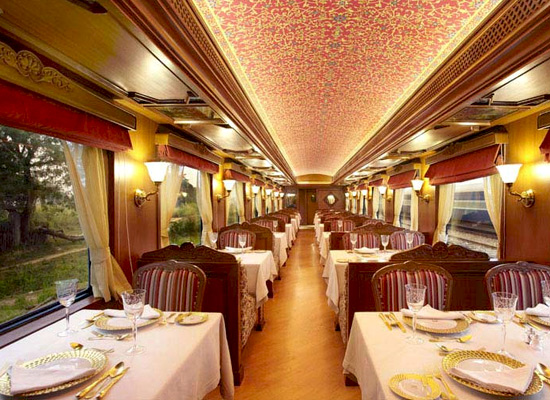 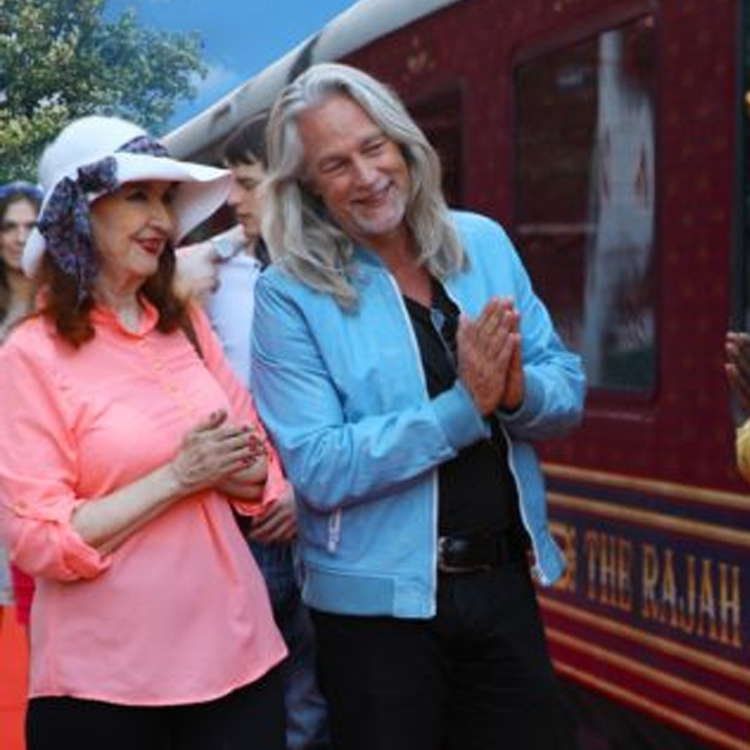 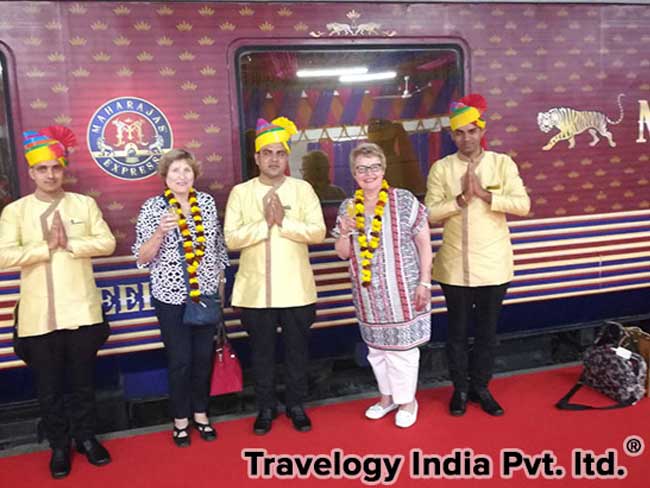 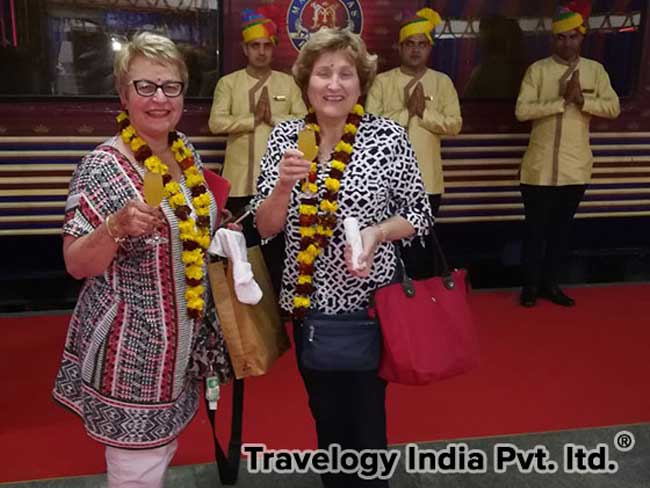 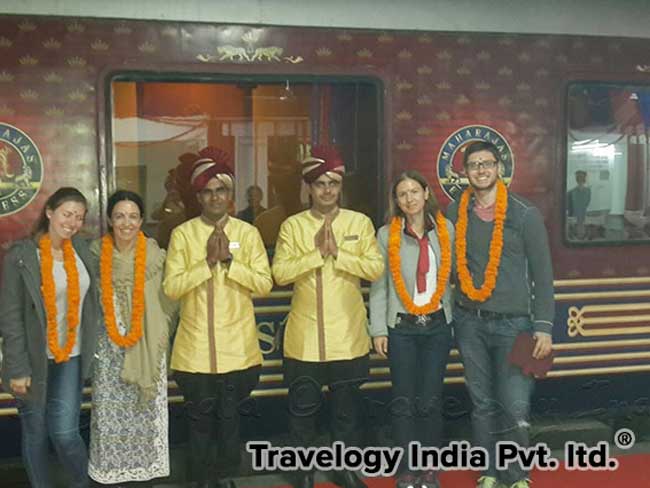 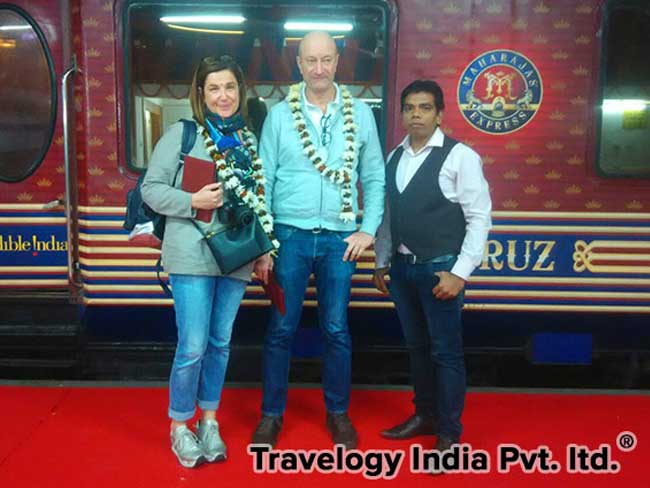 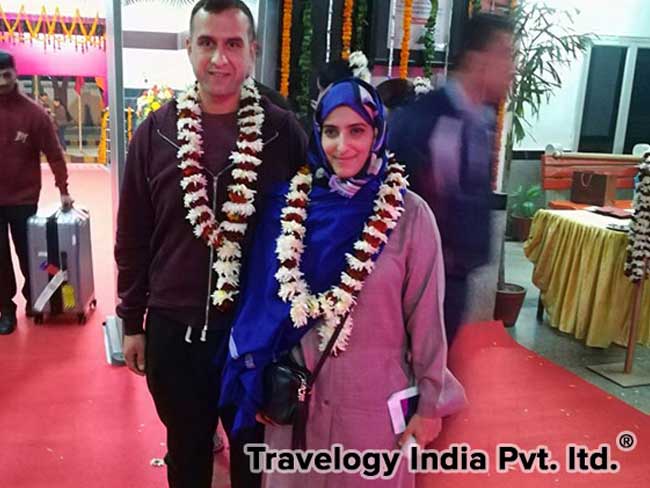 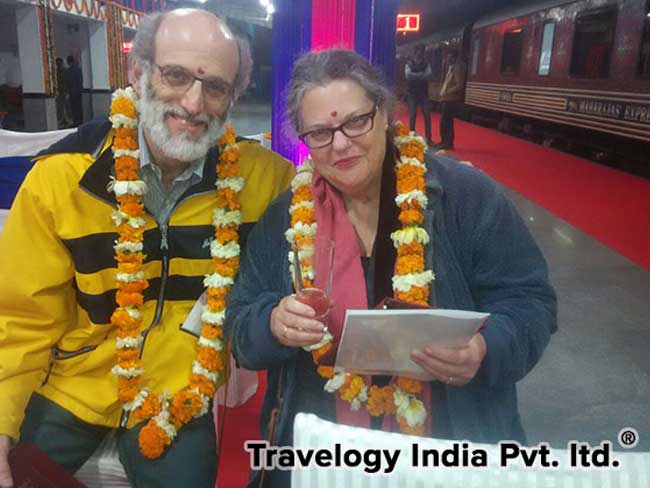 India's culture and traditions are unique and have become acknowledged worldwide so, I decided to take a majestic ride to Indian culture on The Maharaja Express. Wandering through some of the most beautiful north Indian cities I have realized there is more to life. I did a lot of culture soul searching going through the heritage of India, I did shopping in Jaipur, visited museum in Bikaner, rode an elephant in Jaipur, did safari ride in Ranthambore fort and witnessed the great Mohabbat - the Taj show while traveling through India.

On the day of my arrival at Mumbai station, I was very tired by my long flight but all my tiredness was gone with all warm welcome I’ve received. It was like a celebration with drum rolls and greetings by saying Namaste. A lady drew a bindi on my forehead and put a marigold garland around my neck, I was told that it is cultural welcome. Indian culture believes that guests are god and they treat them as one. They also embraced me with a beautiful silk scarf. The path I walking on was covered by flower petals lining leading to the train and music was following us on the background.

After hearing so much about northern Indian culture, food, and people I’ve decided to take the Heritage of India route of 7 days, the route was about to start with Udaipur, Jodhpur, Bikaner, Jaipur, Ranthambore, FatehpurSikri, Agra, and Delhi was going to be the destination. I was really enthusiastic about the tour. Just after getting on-board the butler took our bags and showed our cabin. We took double cabin which was magnificent and had all the facilities like two single beds, a large window, LCD television, an ample sized private bathroom with a walk-in shower, great WiFi connectivity, the room was very elegant and spacious and had very good storage space.

I never had such a beautiful experience of train journey in my whole life, every night falling asleep in the gentle rocking motion of train has been one of my bucket lists and walking up to beautiful sunrise and landscape was there anything else I could ask for.

We made stop at each destination and every time the welcome bash has the same energy radiating through those drums and by dancing to those beats we also showed how much we were looking forward to our next stop.

Day 1 in Udaipur, after reaching there and receiving overwhelming welcome, we left on the bus for the city tour. Udaipur is known as “city of lakes” and “Venice of East” for a reason. The city has beautiful and natural touch to everything, we visited lake Pichola and did boating and sightseeing, it was exquisite, we have to leave for the next destination but I left a piece of my heart there.

When I travel, I mostly travel for food, it’s like food is the motivation for me. While traveling to North India my taste buds had the greatest experience of their lifetime. Food prepared by John Stone made me fall in love with every spice and ingredients. I had also made him write to me some quick recipes I can later recall my memory to. I sat down in two dining cabins Mayur and Rang Mahal occasionally and every time it was a new experience for me with changing scenery from the window. Every night the menu had continental and Indian thali for serving. There were so many options for us to eat like veg, non-veg, vegan, Jain, etc.

On day 3, we arrived in Jodhpur, we directly headed to tour to Bishnoi Village. I’ve never been more excited about anything than taking a trip to a cultural village to India. The village was full of cultural and traditional people. We took a Jeep Safari around the village.

Afternoon we headed to Mehrangarh fort, I’ve heard a lot about this fort and after arriving there I couldn’t believe my eyes as this magnificent architectural fort is just standing in a very majestic manner. We took a vague trip around every corner exploring the values and ethics of Raja and Maharaja who lived here. We took a tour around the market and the area of the old tower, I bought some souvenir for myself to remember every moment of this time. We ended our tour in Jodhpur with an exciting tuk-tuk ride. After the long day, we all went to Hanwat Mahal for dinner and moved toward the train to hit another stop.

On the forth day, I opened my eyes to my attendant with hot beverages just to kick my day off. We all left forBikaner city tour and to explore Lalgarh Museum, by afternoon we left for Junagarh fort and a sundowner at the sun dunes, what a view it was! By evening we attended the exclusive cultural event with delicious cocktails waiting for us, we also had a barbeque in sand dunes.

The fifth day was my ultimate highlight of the entire week. The fifth day was all about the “pink city” Jaipur, we took a morning tour to Amber Fort, which was magnificent and very beautiful. The next majestic thing to do was elephant ride at Amber Fort. After our lunch at Rambagh Palace Hotel, we went to Hawal Mahal, known for its windows known as “Jharokhas” which lets wind in and out freely, we also saw old antiques inside Albert Hall Museum. I enjoyed everything about Jaipur.

After the majestic tour to Jaipur, we went to explore wildlife to Ranthambore National Park, we took safari and explore the whole century and saw some rarest species like Asian tiger.

Our next stop was at most awaiting place for eternal love to Agra. After being done with my champagne breakfast, I couldn’t hold my excitement to witness one of the Seven Wonders of the world-the Taj Mahal, we took the whole tour in and out finding a lot about the culture and Mughal history of India.

Finally, the journey came to a beautiful end, we arrived on our last day to Delhi. After being treated so royally, we experienced a little glimpse of Indian culture in ourselves. With the last toast on our final drink, we hit the safari bar with our loving staff, they all taught us Bollywood moves and it was a very beautiful, elegant and majestic trip of my entire life and it was very hard to say goodbye to all this. The seven days I spent on the Maharajas’ Expres were amazing. So many people describe India as incredible, magical, mystery, and now I finally understand.