10 Places to Celebrate Holi in India – Festival of Colors

“Rang barse bheege chunarwali / Rang barse….”. Rang or colours add an extra dimension, to our daily life and are ingrained in the social fabric of India. So is the ‘festival of colours’- Holi, which is celebrated with joy, pomp, vigour ,food, music and dance all over India.

Holi or Basant Utsav announces the end of the winter and marks the beginning of the King of the seasons, Spring or Rituraj Basant, which has a religious and social background. The celebration usually starts with spraying of powdered colours dissolved in water in the morning and ends with spraying of gulaal or aabir in the evening.

Youngsters go around touching the feet of the elders and seeking their blessings with a pinch of gulaal. Different sweet dishes are also prepared and savoured with love.

As stated earlier Holi in India has many forms. You can go completely religious and witness it in a subdued form or you can enjoy it full flegedly with bhang and DJ.

When Holi is Celebrated in India in 2020?

Come let’s visit the various parts of the country and get a glimpse of the festival in different avatars.

The celebrations start a week before the actual date. So you can well imagine the degree of enthusiasm with which the festival is being celebrated. Being the birth place of Lord Krishna, it is one of the best places to visit during Holi. According to the folklore, throwing of colours actually originated with Radha and Krishna doing the same .

Temples are decorated and a colorful musical procession starts from the temples to the Holi ghat to the river. A religious ambiance is created with chants and hyms. The Dwarkadhish Temple is a site worth visiting in Mathura. 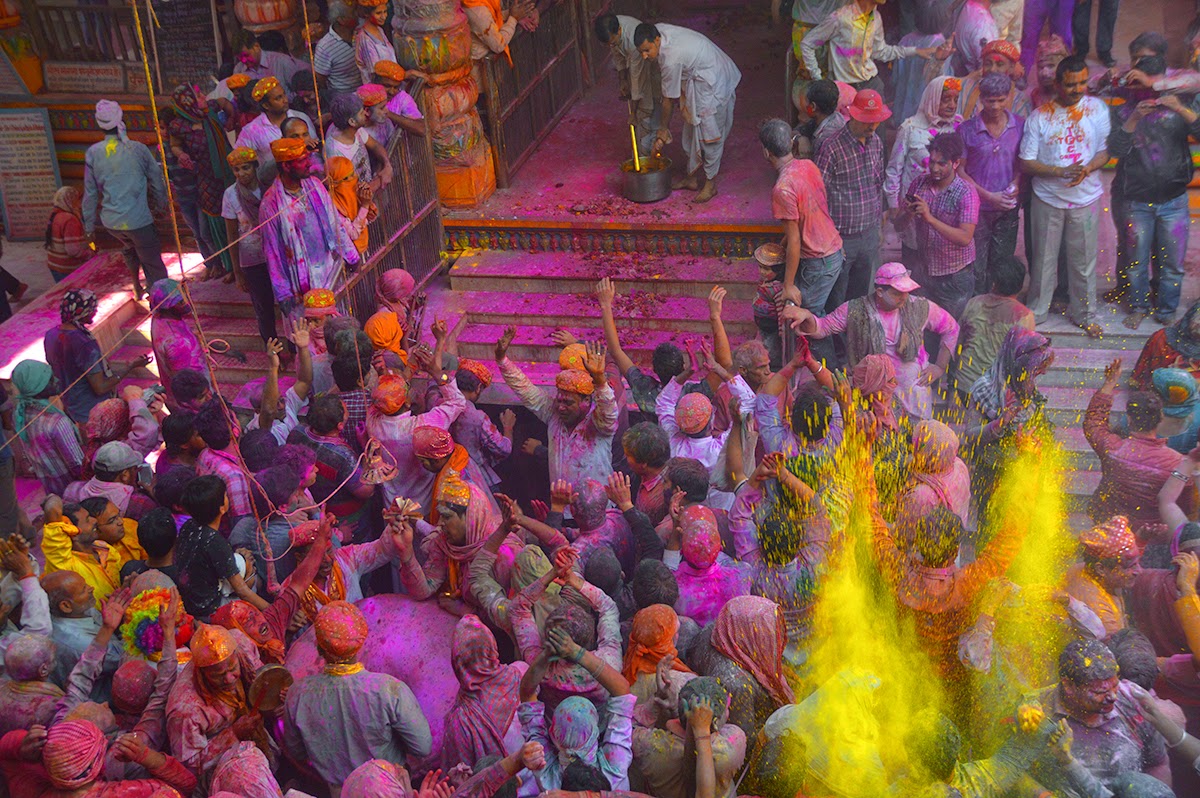 Holi in Mathura at Dwarkadhish Temple

These two places actually form a religious pair together as Lord Krishna spent his childhood in Vrindavan and Barsana is the birth place of Sri Radha, the consort of the Lord. Therefore the love for Radha and Krishna is very well reflected through the ancient traditions, devotion and the uniqueness of the celebrations.

Phoolon wali Holi as the name suggests, holi is played with flower petals being showered by the priests of the Banke Bihari Temple on the pilgrims in Vrindavan. 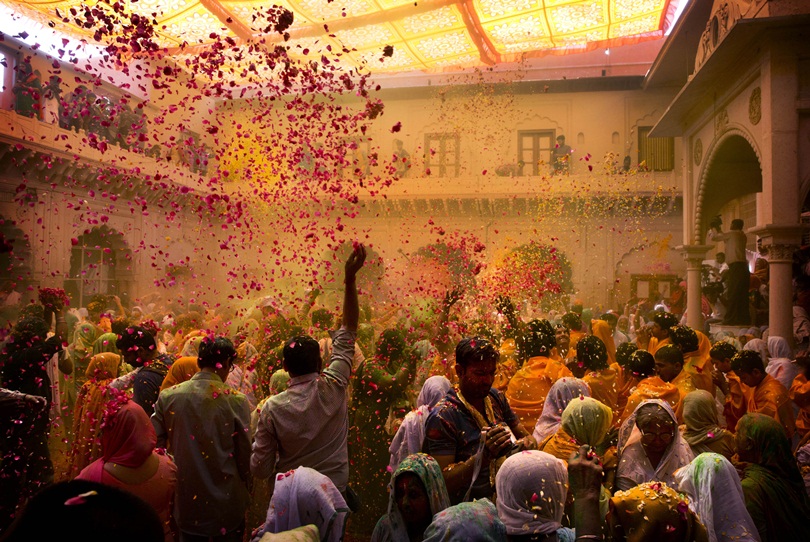 Barsana has the traditional of Lath-mar Holi wherein the female folks beat up men from Nandgaon in friendly banter. This is the place where the Lord used to tease the ladies. The Ladliji temple dedicated to Sri Radha Rani will greet you with its unique traditions.

Delicacies like laddo, thandai, sweets and songs reverting with the love story of Radha Krishna will give you an intoxicating experience. 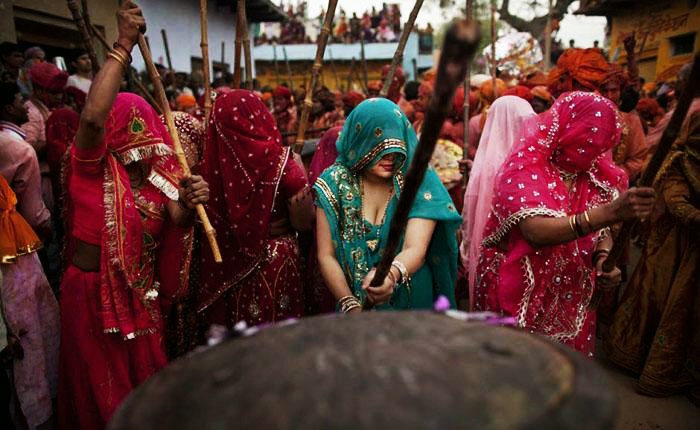 The National Capital of India also comes in the list of best places to celebrate Holi. The effigy of Holika is burnt as a symbol of the victory of good over evil. The next day people enjoy the Holi with non-toxic colors, street food, DJ, bhang etc amidst 40 National and International performers. Holi Moo is also one of the popular events. 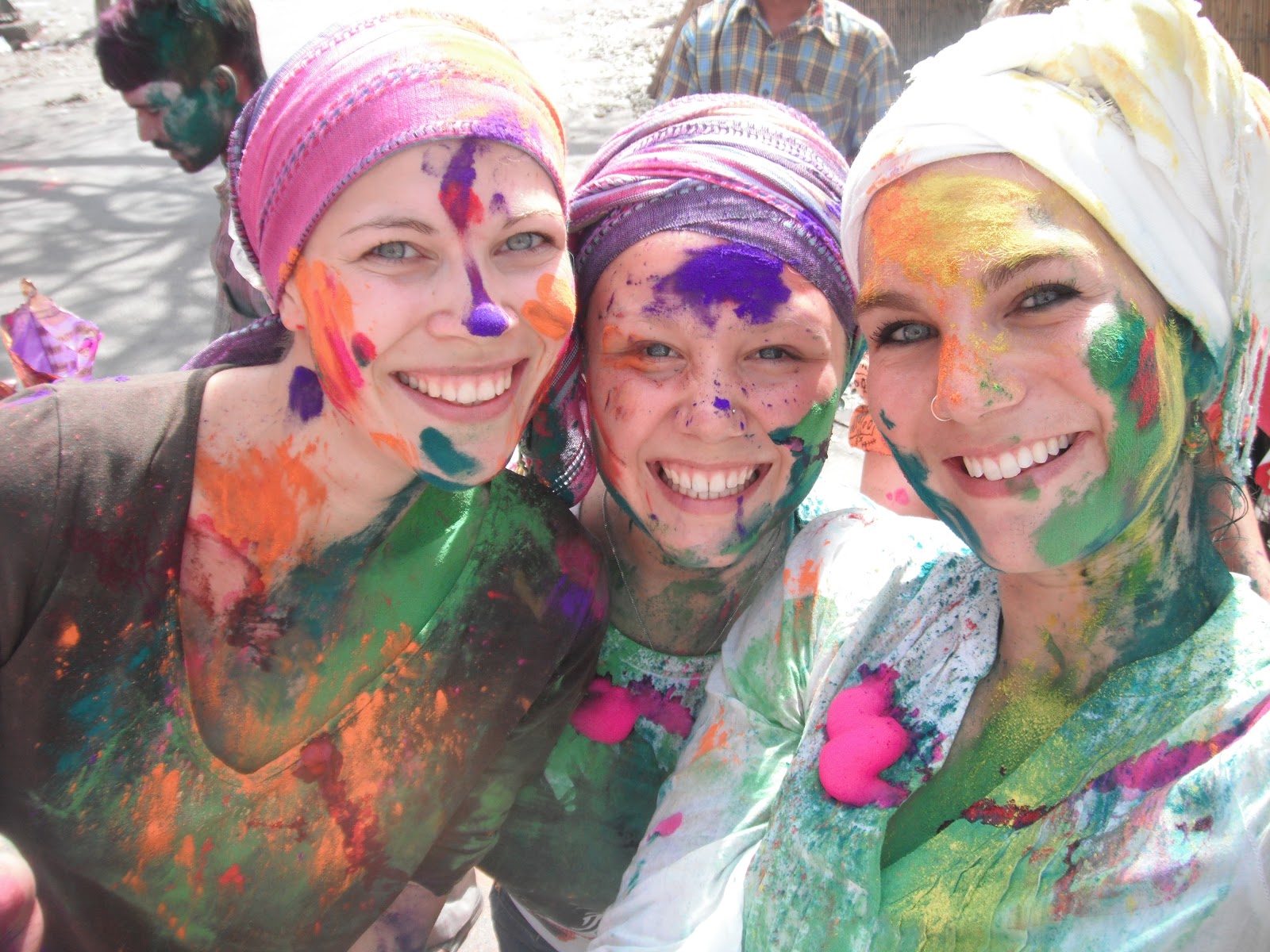 If you are planning to celebrate Holi in Delhi. Choose the Indian Luxury train travel journeys are:

Must Read : How to Book Maharajas Express Train ?

The Nobel Laureate Rabindranath Tagore introduced the festival of Holi as a symbol of universal love and brotherhood. Since then the Basant Utsav is being celebrated in a very unique way. Students of the university get dressed in Basanti or yellow colored garments. Women adorn their head with palash and krisnachura flowers. Lively procession singing songs of Tagore celebrate the festival with dance and aabir.

A huge gathering of tourists and locals throng the premises to witness this proud moment of the bengali culture.

Different Holi celebrations can be witnessed here as instead of colours blue clad Sikh monks called Nihangs can be seen participating in mock sword fights, wrestling, acrobatic military exercise, turban tying. Known as Hola Mohalla, this annual event dates back to 1701, which was started by Guru Govind Singh as a protest to the rising Mughal intolerance. This traditional form of martial art performed by the fierce Sikh warriors is known as ghatkha. 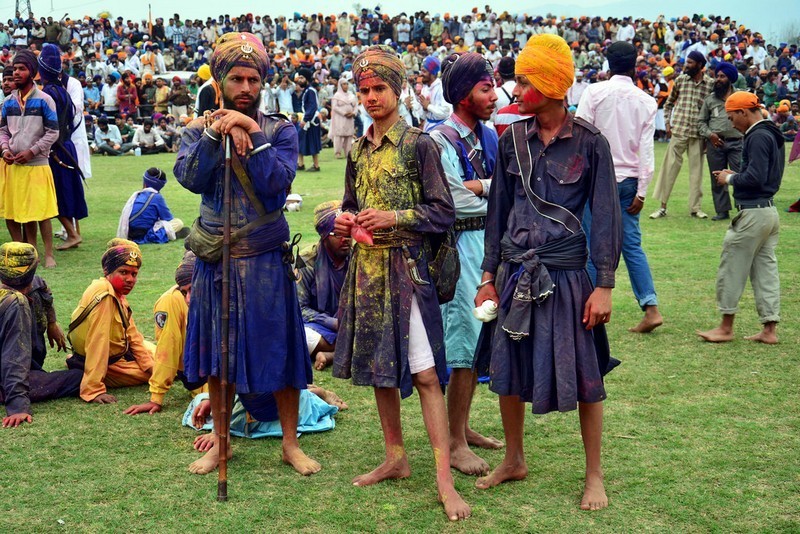 For a simpler version of Holi you can opt Hampi- where it is celebrated for 2 days. The crowd welcomes the Spring amidst spraying of colours, drumming and dancing against the backdrop of the ruins of the Vijaynagara empire. All around you can see colourfull races filled with joy. At the end people wash off frolicking in the Tungavadra river. 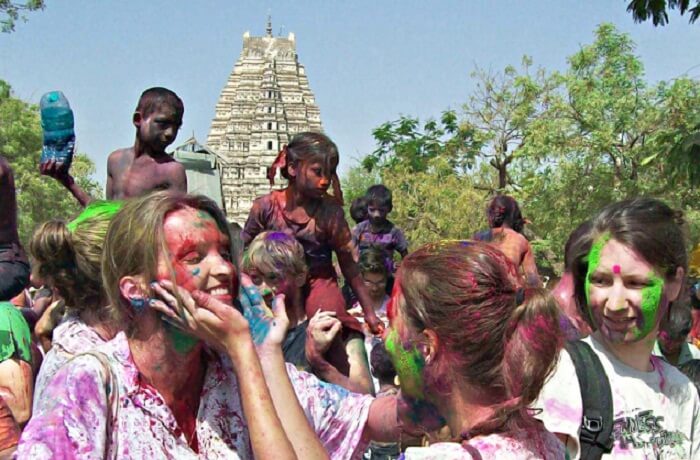 Want to play holi in Hampi, luxury tour packages are:

If you want a change ,you can opt for a tribal flavour of Holi in the tribal district of West Bengal. Basant Utsav is celebrated in 3rd day long festival. The special attractions include the Chhou dance, the Natua dance, the Darbari Jhumur and the songs of the wandering folk baul singers. Carnival like ambiance is created by the drums beats accompanied by the acrobatic stunts. 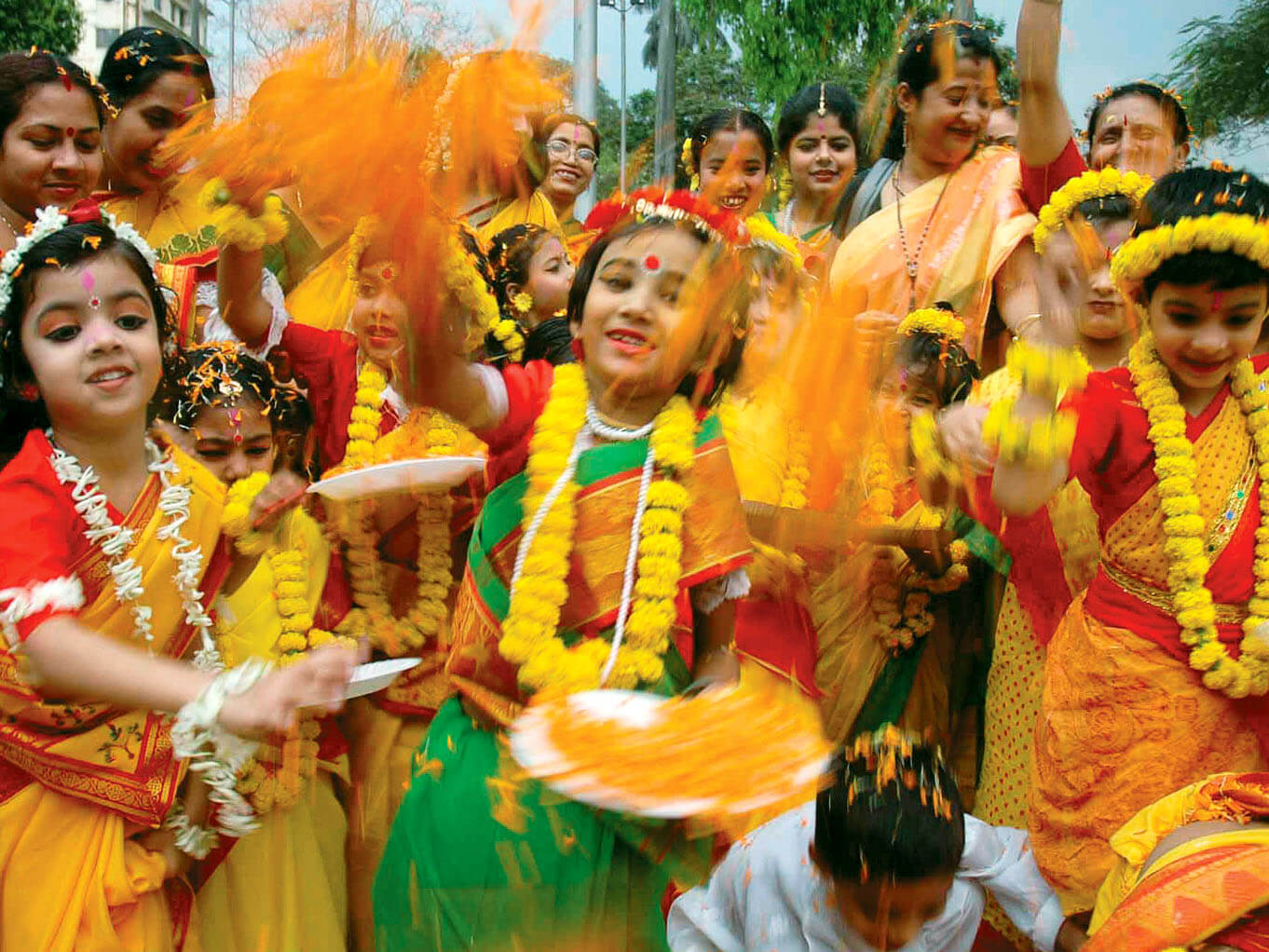 Elephants comprise the key element in the royal celebrations of Holi in Jaipur. Elephant Parade, elephant beauty contests, elephant tug of war were the popular lures in the past when it came to extravagant Holi celebrations.

Due to the pressurization of some Animal Welfare group the event has not been held since 2012.

You may try Eliholi or some private parties for your Holi enjoyment. 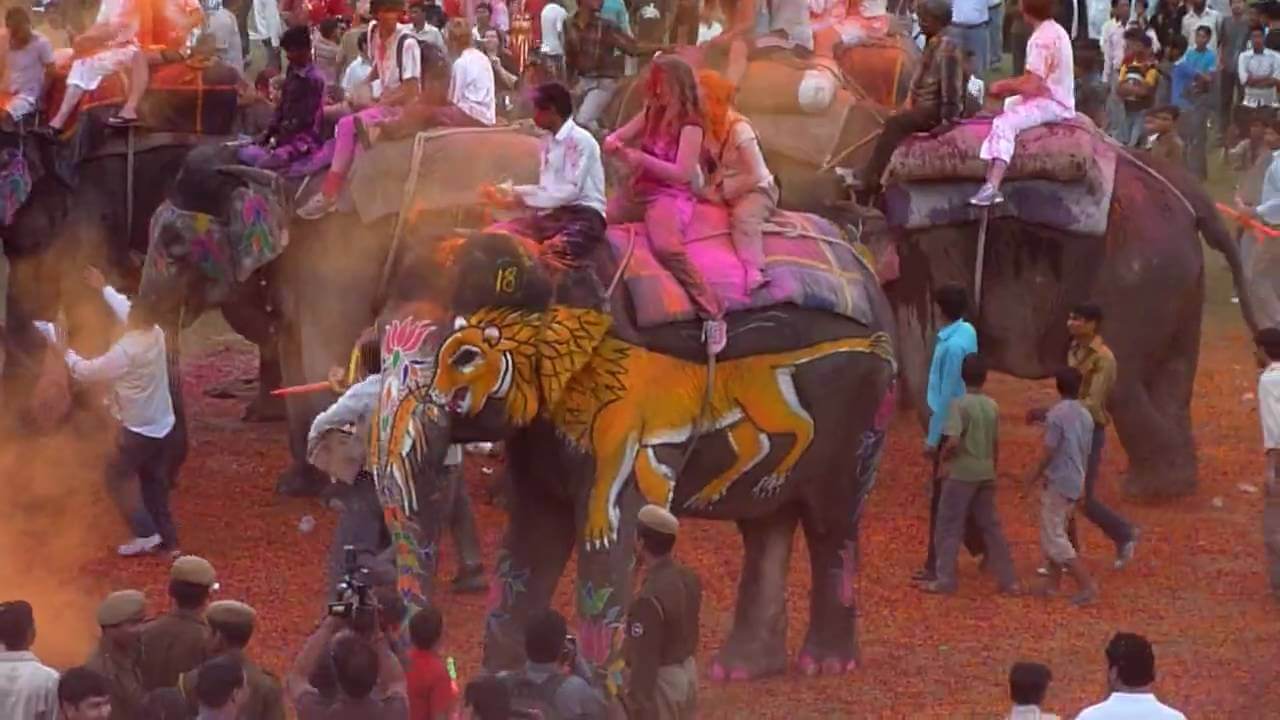 Want to participate in royal celebration of holi in Jaipur and confuse how to reach Jaipur, take the luxury tour packages.

The megacity Mumbai, celebrates holi in its own signature style with matki phor as its main event. Coupling the age-old traditions with modern fun can really be interesting.

Going by the naughty gimmicks of Lord Krishna, the boys assume themselves as the gual baal and form a huge human pyramid around the coloured pots of makhan, milk and colored water. One among them climbs up the pyramid as the Lord did to steal makhan from the market to conquer them. Spraying of colours, food, dance, bollywood music follows. 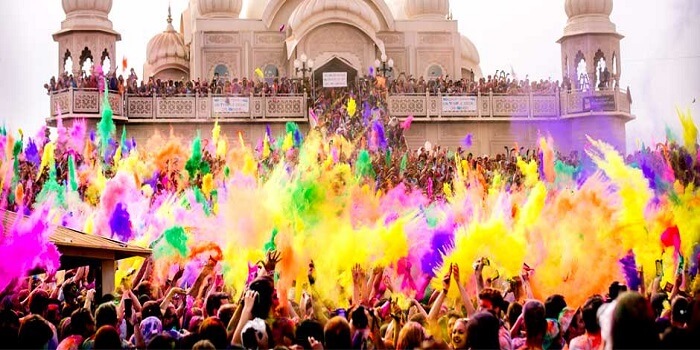 Holi is the color of festival that is celebrated throughout the Udaipur city. Royal celebrations are seen around the City Palace and Manek Chowk but the local markets of old Udaipur and the narrow lanes do not celebrate the holi. 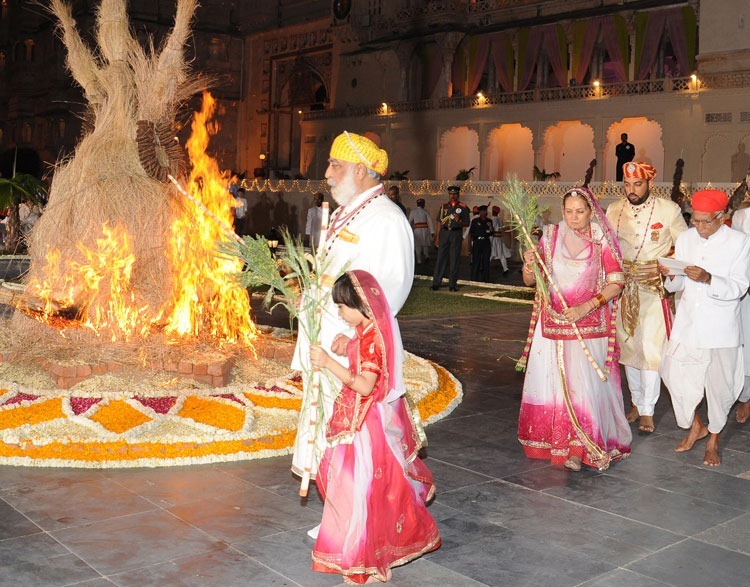