Rajasthan, a state of colours and lights, supremacy and hospitality, ethics and history is not completed without its numerous fairs and festivals, so if you are the one who wish to tour to Rajasthan during fair or festival time, don’t worry, here we bring a list of vivid fairs and festivals of Rajasthan (month wise) that promises to offer you pleasant time.

Rajasthan, a state of colours and lights, supremacy and hospitality, ethics and history is not completed without its numerous fairs and festivals, so if you are the one who wish to tour to Rajasthan during fair or festival time, don’t worry, here we bring a list of vivid fairs and festivals of Rajasthan that promises to offer you pleasant time.

The “Kumbhalgarh Festival” held in Udaipur is a great pleasure for keen enthusiast of art, music and dance. Mostly the festival is divided into two categories day and night. On daytime,traditional artists performed folk dances and competitions like turban tying and henna applying, while the night is filled with splendid bursts of crackers, lights, sound, colours and dance. If you want to be a part of this festival, take the luxury train ride – Palace on Wheels and enjoy the festival. 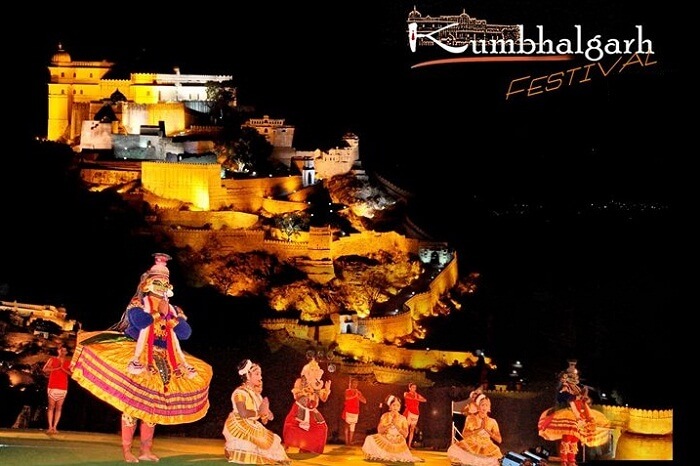 “Ranakpur Festival” which is held in Pali presents an exclusive view into the local culture and heritage of Rajasthan. The main attraction of this festival are: Tug of war, wonderful decorations, cultural programmes and amazing folk and classical performances at the open air amphitheatre at Sun Temple, Pali. 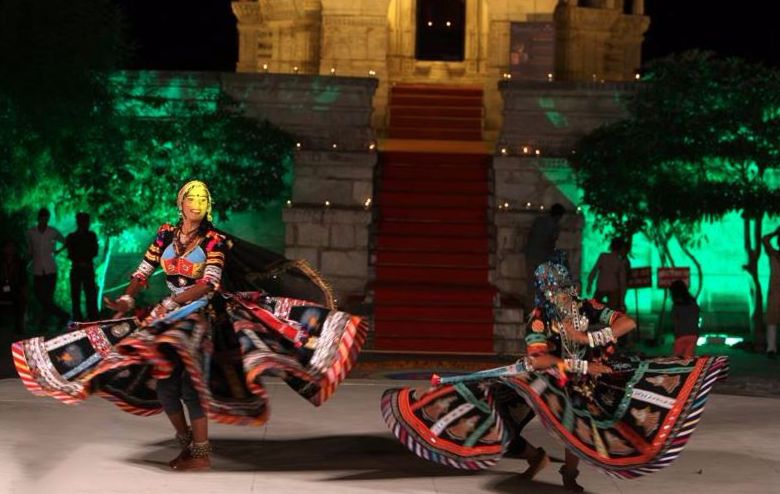 The “Winter Festival” which is held in Mount Abu is a perfect fusion of cultural esprit, astonishing handicraft and lip-smacking food.  The three features that make this festival unique are: ‘Sporting and entertainment events’, such as:  Kite flying, rowing competitions, cricket and poetry reading sessions, second its ‘Huge Procession’ followed by not only flashy fireworks but the folk songs and dances performed by troupes coming from Punjab, Rajasthan, Gujarat and other nearby states allure everyone and last but not least ‘Deepdaan Ceremony’ at the Nakki lake in which hundreds of diyas (earthen lamps) are float on the water as a form of respect.

The “Pushkar Camel Fair or Pushkar Mela” which is held in the town of Pushkar is renowned as one of the world’s biggest camel fair. Aside from the buying and selling of animal like bullocks, cows, oxen’s, camels and horses, this festival entice everyone through its distinct competitions such as: ‘matka phod’, ‘longest moustache’ ‘bridal competition’ and an ‘exhibition cricket match between the local Pushkar Club and a team of foreign tourists’. 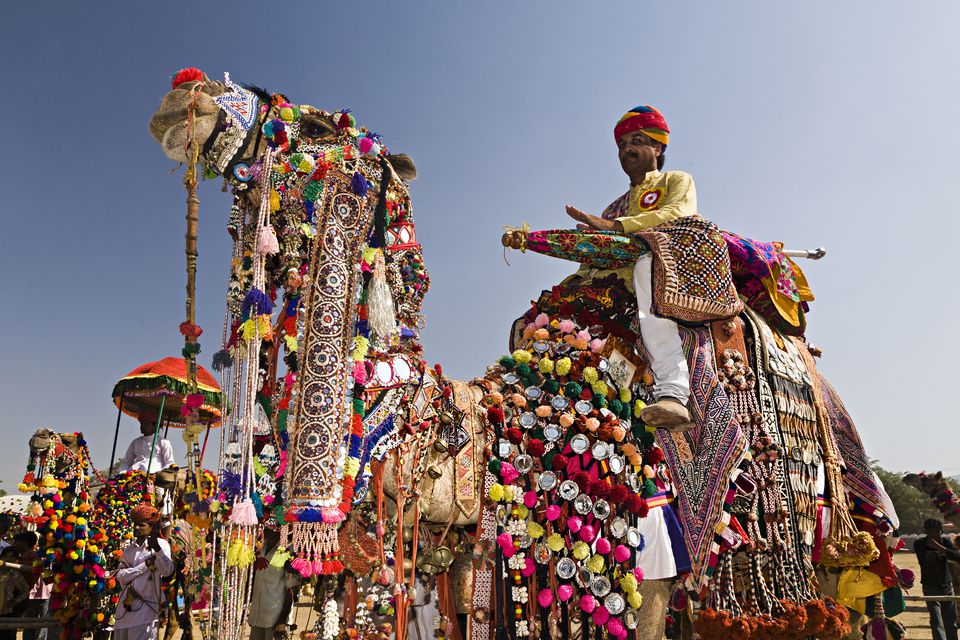 Except this, one ritual that no one forget here is to light diyas or lamps on the banks of River Chambal for good blessings. 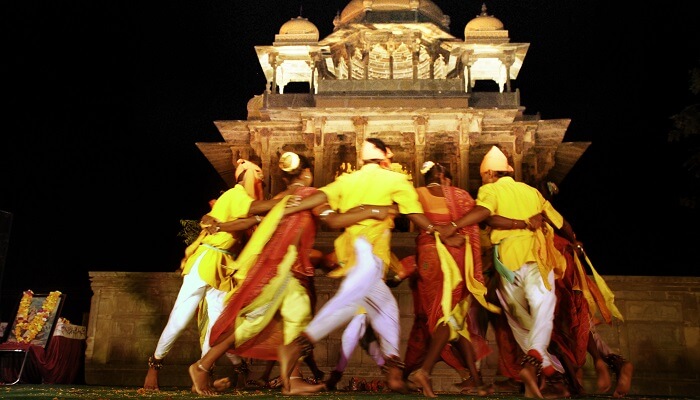 The “Kolayat Fair” also known as “Kapil Muni Fair” held in Bikaner possesses huge religious significance. It is believed that a holy dip in the Kolayat Lake can clear all the sins, apart from this, grandeur and display of the fair is one of the thing that mesmerize tourists from all around the world. 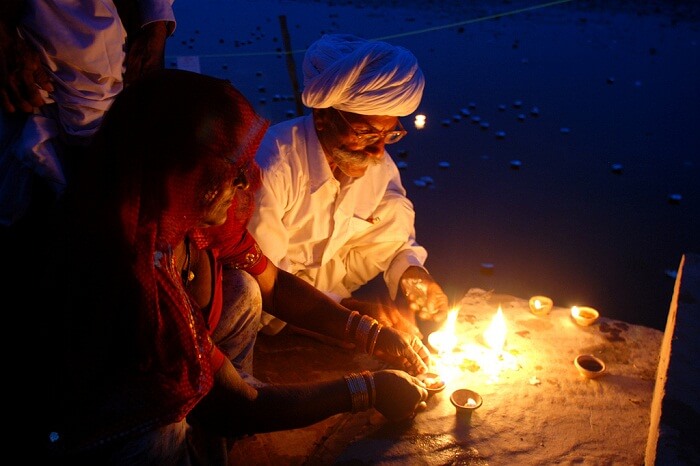 “Chandrabhaga Fair” which is held in Jhalrapatan, located at a distance of about six kilometres from Jhalawar is a unique fusion of trade and celebration. It is believed that, on this time if anyone take a holy dip on the banks of river Chandrabhaga will purify its soul.

Despite this, a huge cattle fair is also organised here, where animal such as cows, horses, buffaloes, camels and bullocks are buy and sell, if you think that’s it, so wrong, the Department of Tourism organize in addition of three day activities for tourists like traditional Deepdan, Shobha Yatra and various competitions. 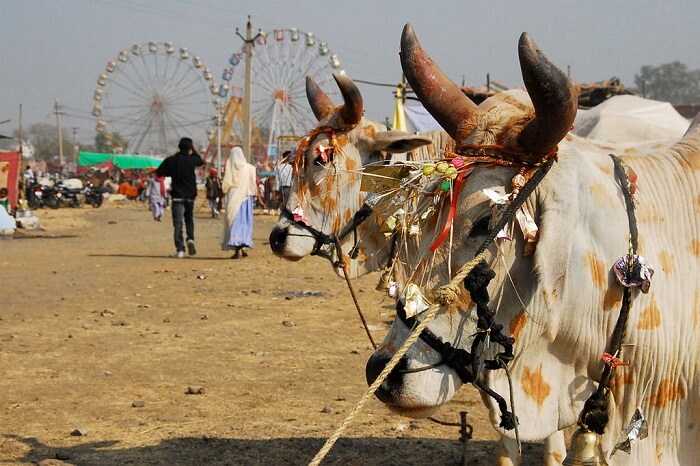 The “Matsya Festival” which is held in Alwar is famous for its vivid processions, cultural performances, an array of sporting events and remarkable artistic exhibitions. Not only this, Matsya Festival is the perfect time, if you really want to explore the erstwhile royal kingdoms at Alwar numerous palaces and forts, lakes, hunting lodges, archaeological sites and forests. 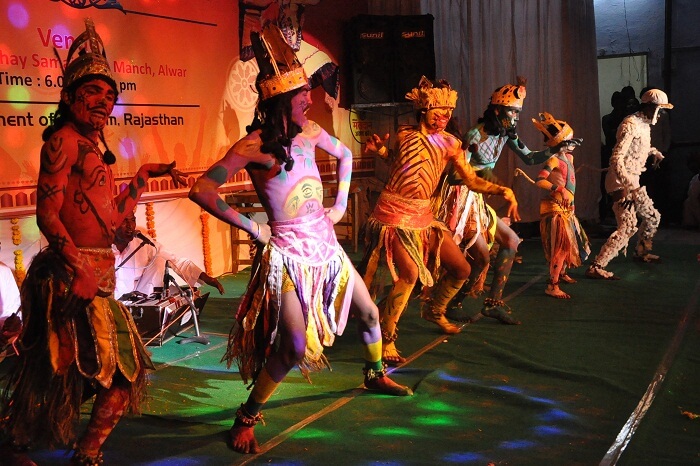 “Adventure Festival” which is held in Kota every year during Dussehra (October) is a treat for adventure enthusiasts. On this festival, tourists from across the world don’t witness several events such as: parasailing, rafting, wind surfing, water skiing and kayaking but they can also participate in various activities like: rock climbing, gliding, trekking, angling and rural excursions. 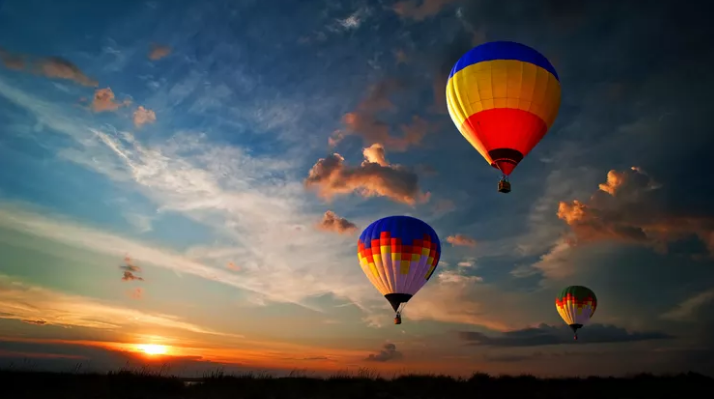 The “Abhaneri Festival” which is held in the village Abhaneri (around 90 km from Jaipur) is a unique combination of live cultural evening, street plays (nukkad natak) and a tour of the village on camel carts.

Here you won’t enjoy vivid Rajasthani and local folk performances like Mayur Dance, Terahtali, Chakri Dance, Ghoomar, Pad Dangal, Kachhi Ghodi, Behrupia, Bhavai and many others but an ‘Art and Craft Exhibition’ and ‘Village Safari’ dive you into the rural charm of the village 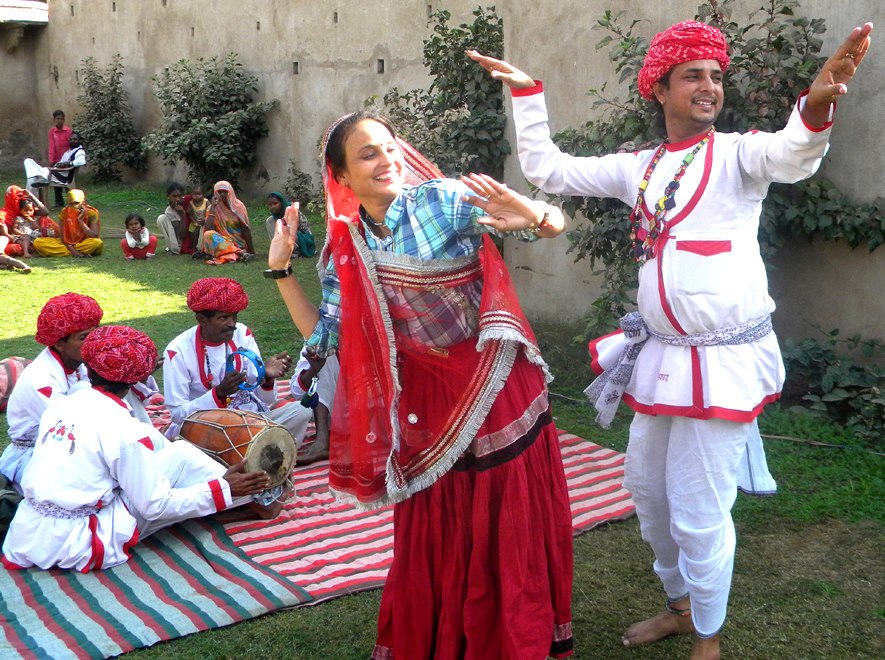 One of the hugely celebrated festivals of Rajasthan “Teej” is mostly for women. Swings, traditional songs and dances are the highlight of Teej festival.

On this occasion, women adored green colored clothes, pray to the goddess Parvati, also known as Teej Mata, perform traditional folk dance and sing beautiful Teej songs on swings decorated with flowers. Ghewar is the main sweet dish of the festival which enjoyed completely over this duration. 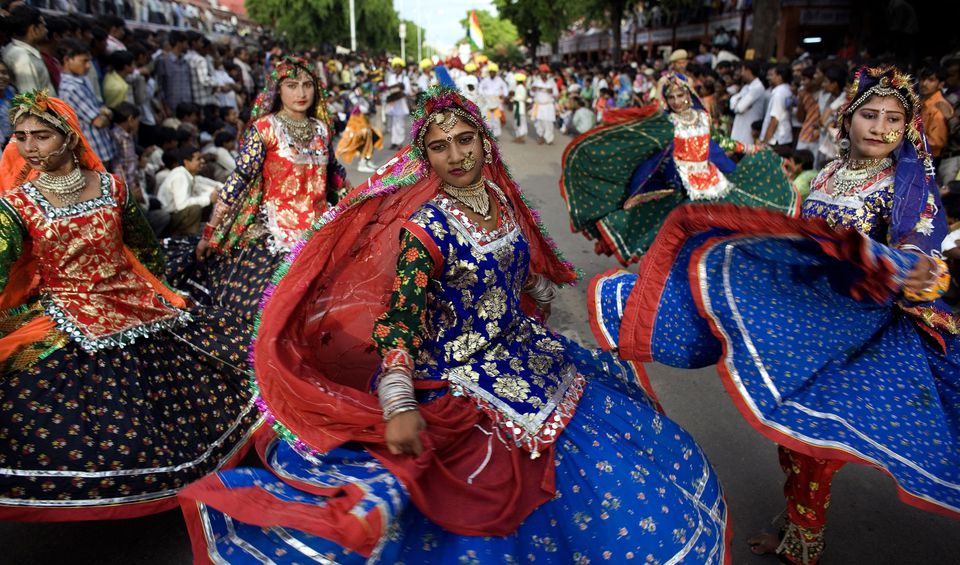 The “Summer Festival” which is held in Mount Abu is a perfect treat for music, art and culture lover. The highlight of this festival is ‘Sham-e-Qawwali’, a much foreseen musical show where famous qawwali singers entice the audience, along with ballad singing, traditional procession followed by various folk dance styles of Gair, Ghoomar and Daph and variety of sporting events and competitions like Skating Race, Boat Race, Horse Race, Tug-of-War, Panihari Matka Race, Deepdan and dazzling fireworks make it a one-of-its-kind experience. 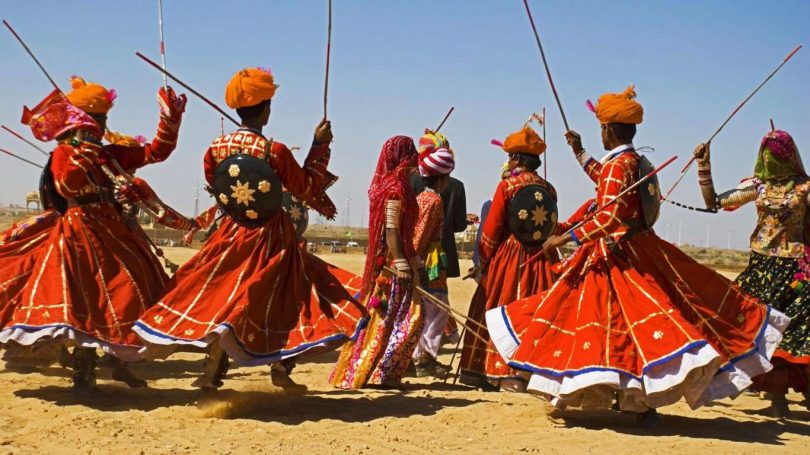 One of the most vibrant and colourful festival celebrated all over India “Dhulandi Festival” (Holi) is celebrated in a very unique way in Jaipur, here the Department of Tourism organizes an event on the lawns of ‘Khasa Kothi hotel’especially for foreign tourists, where visitors and foreign tourists don’t have a pleasure time playing witfvh dry colours while dancing to Rajasthani folk music performed by local artists and much more awaits for them. 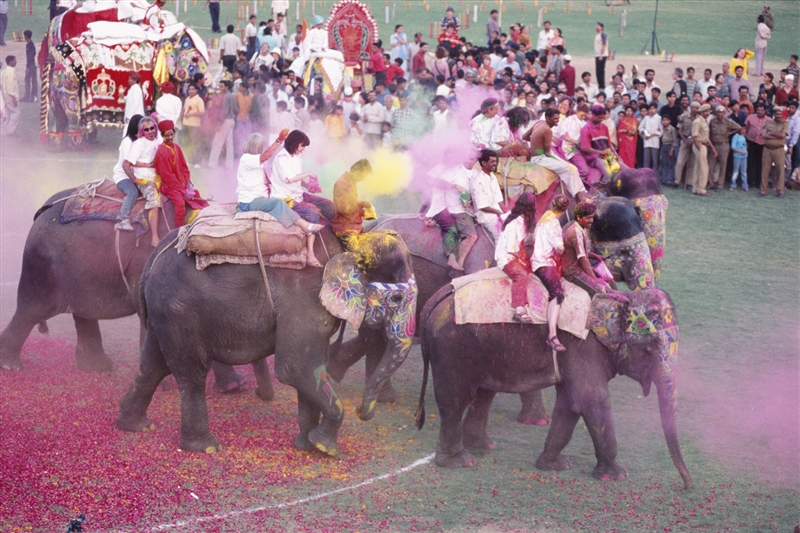 Mewar Festival which is held in Udaipur is a festival that welcome spring season with food, song and dance. Like ‘Teej’ this festival is also mostly for women, on this occasion, women adored beautiful clothes and take images of Goddess Gauri to Lake Pichola for immersion and a procession of boats ends the celebrations. Dances, songs, cultural events and firework display are the highlights of this festival. 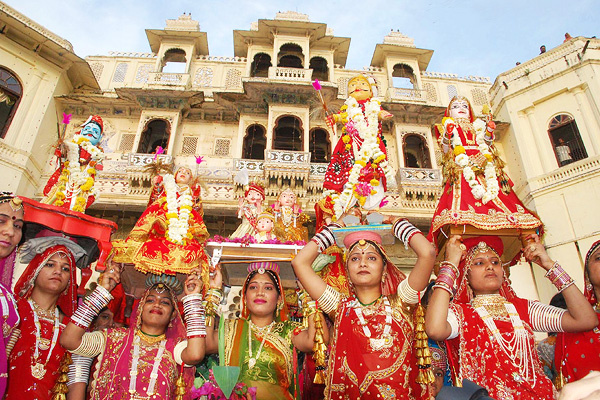 One of the most famous festivals celebrated all over Rajasthan“Gangaur” is a woman –centric festival. On this festival, all women’s worship clay idols of “Gan”and “Gaur” (Gan which stands for Lord Shiva and Gaur for Goddess Parvati) in their houses for good health and long life of their husbands.

These idols are worshipped by unmarried girls also for good husband. Despite this, procession,dances, songs, cultural events and Gangaur fairs are the features that allure tourists from all around the world. 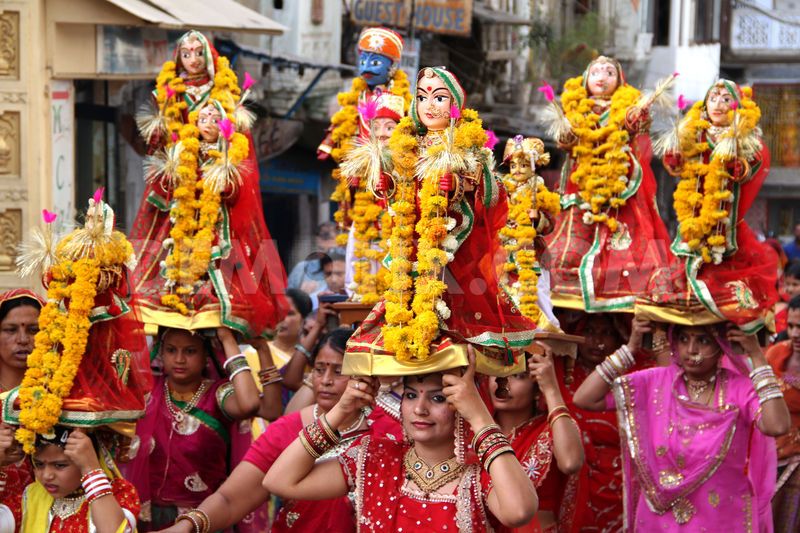 The “Braj Festival” which is held in Deeg, Kaman and Bharatpur is devoted to Lord Krishna. It’s believed that Lord Krishna spent an enough time in Braj. This festival not only represents the soul of Holi but also present the eternal love of Radha and Krishna through ‘Raslila’ dance. 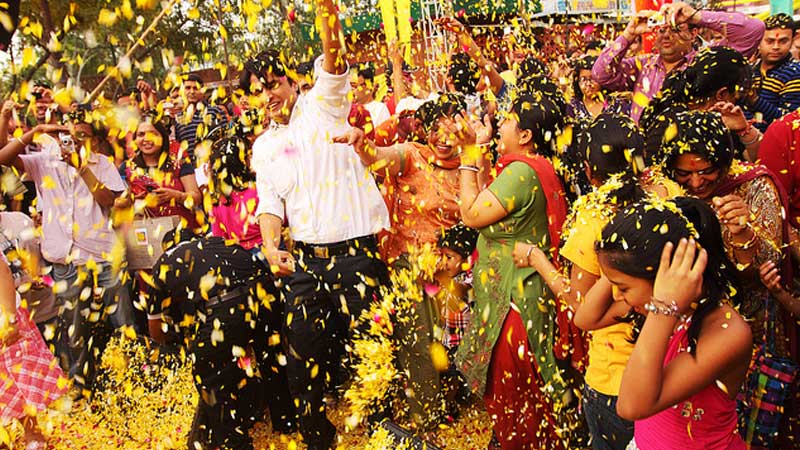 The second largest fair in India “Nagaur Fair” also known as“Cattle Fair” is held in Nagaur, the main highlight of this fair is animal trading, approximately 70,000  bullocks,cows, oxen’s, camels and horses are traded every year at this fair…not only this, other feature that allure tourists is mirchi bazaar (biggest red chilli market of India), sale of wooden items, iron-crafts, camel leather accessories,jugglers, puppeteers, storytellers and sports like tug-of-war, camel races and bullock races. 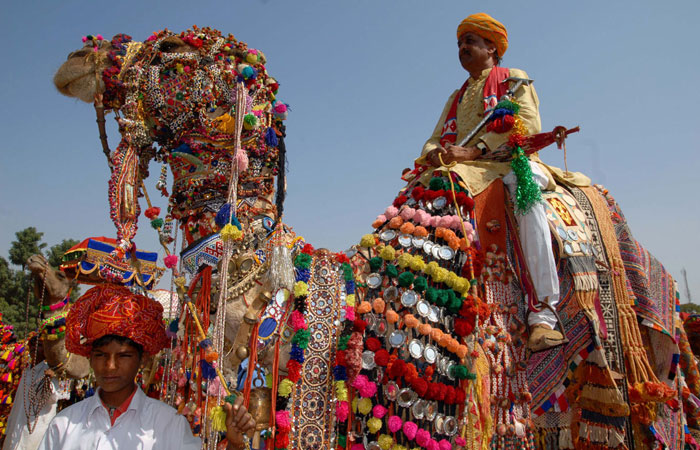 “Jaipur Literature Festival” famed as the ‘Big literary show on Earth’ invites not some of the great writers from all over the world at the “Diggi Palace, Jaipur”, but this is the only festival where readers satisfy their strong desire for deep thoughts and being an inch closer to their favourite writers like Michael Ondaatje, Ben Okri, Richard Dawkins, Amy Chua, Tom Stoppard and Oprah Winfrey. 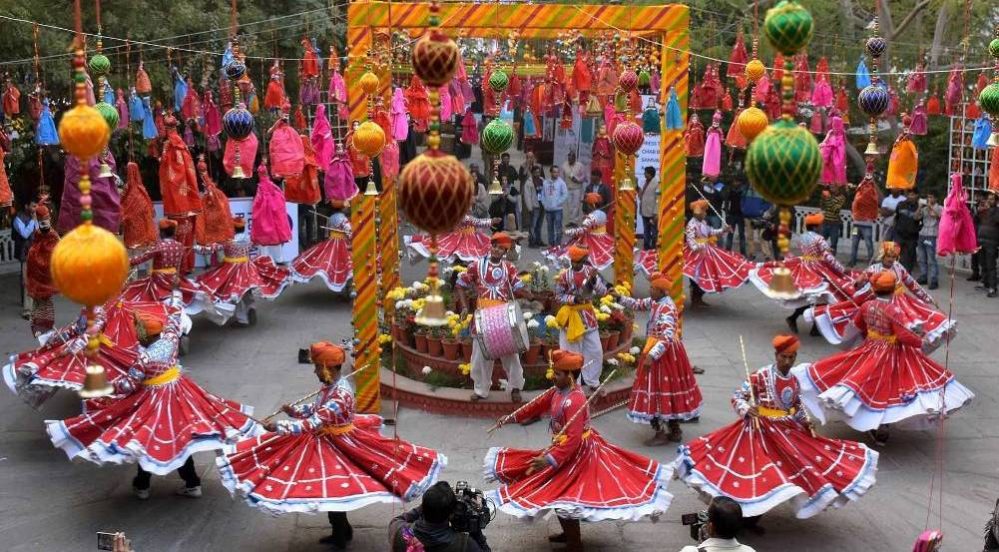 Not only this, besides the food, music and the cultural performances the focal point of the festival are puppeteers, acrobats, camel tattoo shows, camel races, camel polo, traditional processions, camel mounted bands, folk dances and fireworks that displays at night and light up the area and the fort too. 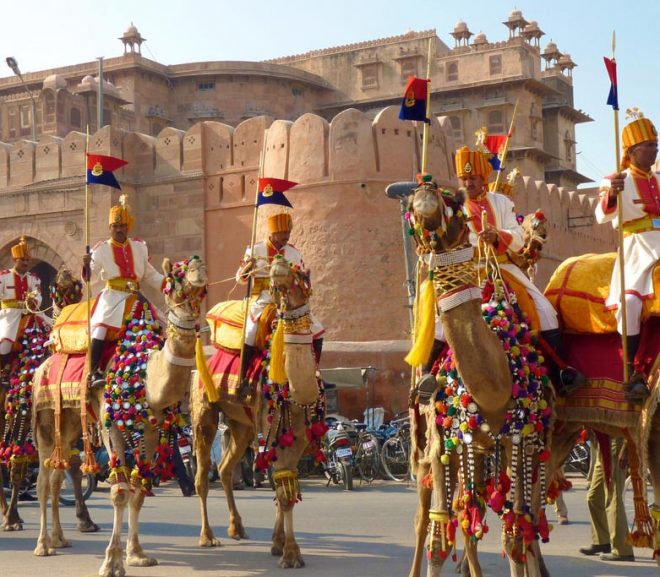 Organised by the Rajasthan Tourism Development Corporation, “Bikaner Camel Festival” at Junagarh Fort is a perfect event for those who want to watch Rajasthan in its full majesty. 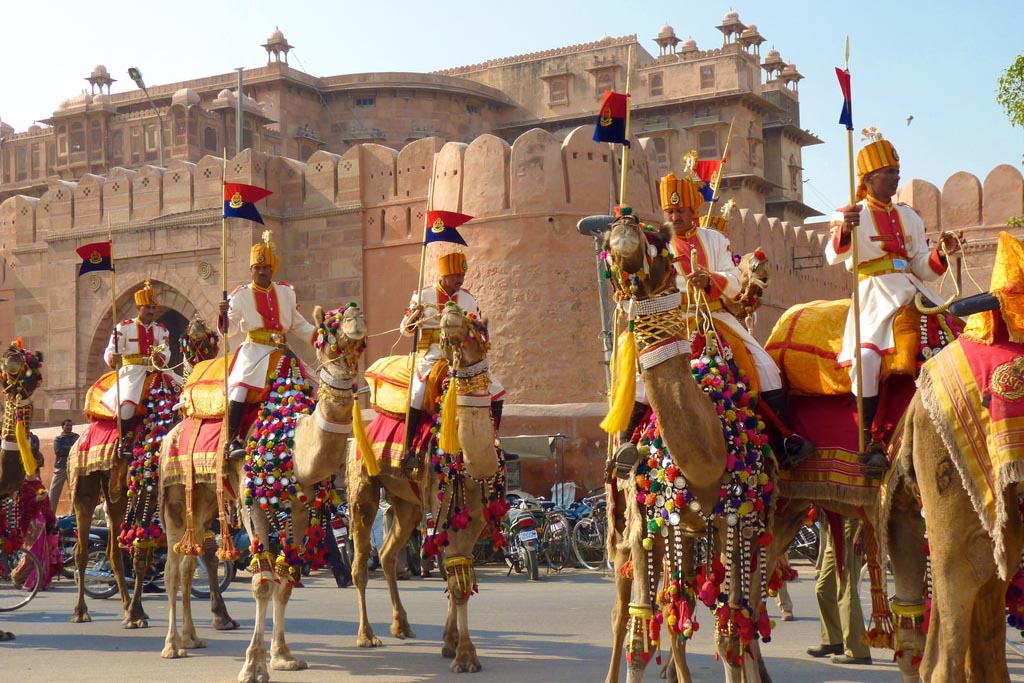