Vande Bharat Express – Everything You Need to Know

Indian Railways fastest engine-less train – the Vande Bharat Express – also known as Train 18, is all set to be flagged off very soon by Prime Minister Narendra Modi on the Delhi-Varanasi route. The Vande Bharat Express will cover up the distance between Delhi and Varanasi in eight hours, stopping at only two stations – Kanpur and Prayagraj.

Indians teem up with excitement as the launch of a dream train draws nearer. Very soon, passengers will be ready to sit back and sip coffee in the Vande Bharat Express as the trains zooms past stations at a speed that they have all been waiting for.

What to Know About the Train

The Vande Bharat Express, also known as the Train 18, is a semi – high speed intercity electric multiple unit. This was designed and built by Integral Coach Factory in Chennai under the Indian government’s initiative over a span of eighteen months.

This train is estimated to be 40% less costly than a similar train imported from Europe. Hopefully, this train will be first launched from February, 2019, which before its launch, a second train too shall be produced and made ready to be put to service. The service got its name ‘Vande Bharat Express’ on the 27th of January 2019.

Over the next year, another unit is planned for production, along with four more units in the following year which will make it a total of six. The Railway Board has requested for two sets of new units have to be completed by the ICF by May 2019. Two of these units will also incorporate sleeper cars into the layout.

The train set is scheduled to be flagged off for an inaugural run by the Indian Prime Minister Narendra Modi, on February 15, 2019. Its commercial run will start from the 17th of February, 2019 and will run on the Delhi- Varanasi route, via Kanpur and Prayagrag. At an operating speed of 160 kilometres per hour (99 mph), it is expected to outpace the Shatabdi Express by 30 kilometres per hour (19 mph). The train has even been tested for speeds upto 180 kph, and an operational speed has been capped at 160 kph. Every other car on the train is also motorized. 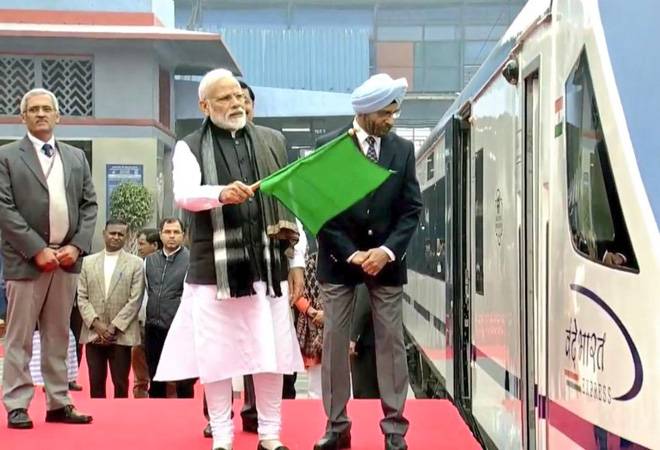 Train 18 will now be known as Vande Bharat Express. It’s a train built completely in India by Indian engineers, in a span of 18 months. It’ll ply from Delhi to Varanasi. It is an example that it’s possible to make world-class trains under Make in India,”said Piyush Goyal.

Also Read:  How to Book Luggage in Indian Railways?

It is completely made in India and various names were suggested by the general public but we have decided to name it Vande Bharat Express. A gift on the occasion of Republic Day to people. Will request the prime minister to flag it off,” he said.

The words of Piyush Goel, the Railway minister clearly states that the Train 18 would be called Vande Bharat Express to acknowledge its made- in- India status.

Facts about the Train

Pretty soon now, the train will be flagged off by the Indian Prime Minister Narendra Modi. This train will mark a new era in the travel technology for Indian Railways. It is said that this train will be more effective than the Shatabdi Express train.

Vande Bharat Express will boast of several passenger friendly features. Right from onboard wifi connection, to entertainment, GPS based passenger information systems to comfortable seats. This train will be the dream of many Indians to come.

Here are some features of the Vande Bharat Express:

Of course we’ve all seen engine less trains in our metros, but this will be the first self propelled engine less train for inter- city travel. This technology will allow for faster acceleration and deceleration, hence reducing engine time. 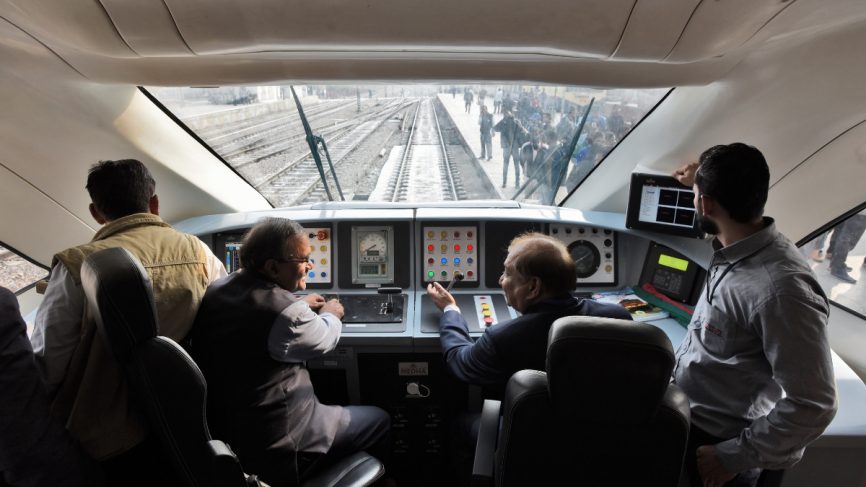 While we are all complaining of stuff not being made on time, our very own Train 18 has been made in a record time of eighteen to twenty months. A project such as this would usually take about three years to finish, but the Vande Bharat Express was worked on from March 2017 and in no time India has its own Engine less inter city train.

The Vande Bharat Express marks the first of many more trains that will be able to run at 160 kmph. It is said that this train will look to accelerate introduction of semi high speed travel in Indian Railways.

Sliding doors isn’t new. Sliding doors had been introduced on the Tejas Express, but this will be for the first time that the doors will have sliding footsteps that will make boarding and de-boarding simpler for passengers.

Train 18, will have European styled seats, which according to an ICF official, the frames will also be of European style making it more firm and durable. Besides comfort, these seats will also look attractive.

Also Read:  Indian Railways is Getting World-Class with Train 18

According to various sources, the Vande Bharat Express will be a sporting white colour, with some vinyl strips or bands. But in the end, the final isn’t known and that will be a surprise for the Indian people.

Like every other trains, this train too will have a pantry. And like the Shatabdi Express Trains, each coach of Train 18 will have a mini- pantry with heating chambers for food and refrigeration for beverages. However, the main difference would be that the pantry facilities would be comparatively better. The equipment that will be used for heating and refrigeration would be of better quality and better maintained.

The Indian Railways have decided on taking up a noteworthy step, by making the Train 18 a disabled friendly train. Some coaches of the Vande Bharat Express will have spaces to park wheel chairs, hence making the journey more comfortable and more reliable for the disabled.

9. To be a replacement to the Shatabdi

Train 18 will have a driver at each cabin end. The entire set will operate on a computer unit, where they will communicate with each other digitally. 9 as said by ICF GM Sudhanshu Mani.

Fares of the Train

The train has two classes of tickets such as executive class and chair car. Both will have differently priced meals. While passengers who will be travelling from New Delhi to Varanasi in the executive class will be charged Rs. 399 for morning tea, breakfast and lunch, travellers in the chair car will need to pay Rs. 344 for the same. They who will be travelling from Varanasi to New Delhi, the passengers will be charged Rs. 349 and Rs. 288 in the executive class and chair, respectively for the meals.

However, meals on the Vande Bharat Express will not be optional for passengers, unlike in premium trains such as Shatabdi, Rajdhani and Duronto Express, where passengers can choose not to avail catering services. However, passengers travelling the last trip on the route of the train – Prayagraj to Varanasi – will have the choice of opting out of the meals in advance which will be done in the beginning while booking their tickets.

Route of the Train

Under the proposed schedule of Vande Bharat Express, Train 18 will depart from Delhi at 6:00 AM to reach Varanasi by 2:00 PM in the afternoon. On its way, it will stop on the Kanpur station at 10:20 AM and Prayagraj (formerly called Allahabad) at 12:25 PM. On its return journey, the Vande Bharat Express will leave from Varanasi at 3:00 PM to arrive in Delhi at 11:00 PM. On the way, it will stop at Prayagraj at about 4:35 PM and Kanpur at 6:30 PM. Vande Bharat Express will run for five days a week – Tuesday, Wednesday, Friday, Saturday and Sunday. On Monday and Thursday the new self-propelled train will put in to undergo maintenance.

Meals onboard the Train

Chaayos and Nescafe are geering up themselves to serve tea and coffee to the passengers who are looking forward to the trips on the Vande Bharat Express. The soon to come Indian Fastest train will serve good square meals from lunch to dinner, which would be from branded places like Pind Balluchi and Landmark Hotel.

The menu is still under construction and people are promised an elaborate affair and an array of food! The IRCTC (Indian Railway Catering and Tourism Corporation) is taking that extra step towards keeping the customers satisfied and their tummies full and well fed.

A sneak peek into the grun on the train:

While the lunch would be from Allahabad’s (present Prayagraj) Pind Balluchi and will be loaded from there when the train stops, the dinner will be from a restaurant in Kanpur’s famous 5-star Landmark Hotel.

Some Other Luxury trains run by Indian Railways

So, what are you waiting for experience the journey at Vande Bharat Express and make some amazing memories. Happy Traveling People.