We’ll tell you everything you need to know about the Belmond British Pullman train, including the train’s history and carriage seating arrangements.

A Brief History of the Belmond British Pullman Train

The train carriages for the Belmond British Pullman were bought by American businessman James B. Sherwood, who hoped to resurrect a luxury train service similar to the historic Orient Express. Sherwood acquired a large collection of historic train cars, including sleepers, Pullman cars, and dining cars, in the late 1970s and early 1980s.

Many of James Sherwood’s train cars are used for the Venice Simplon-Orient-Express, but the Pullmans are particularly used for UK routes with a base in London’s Victoria Station. 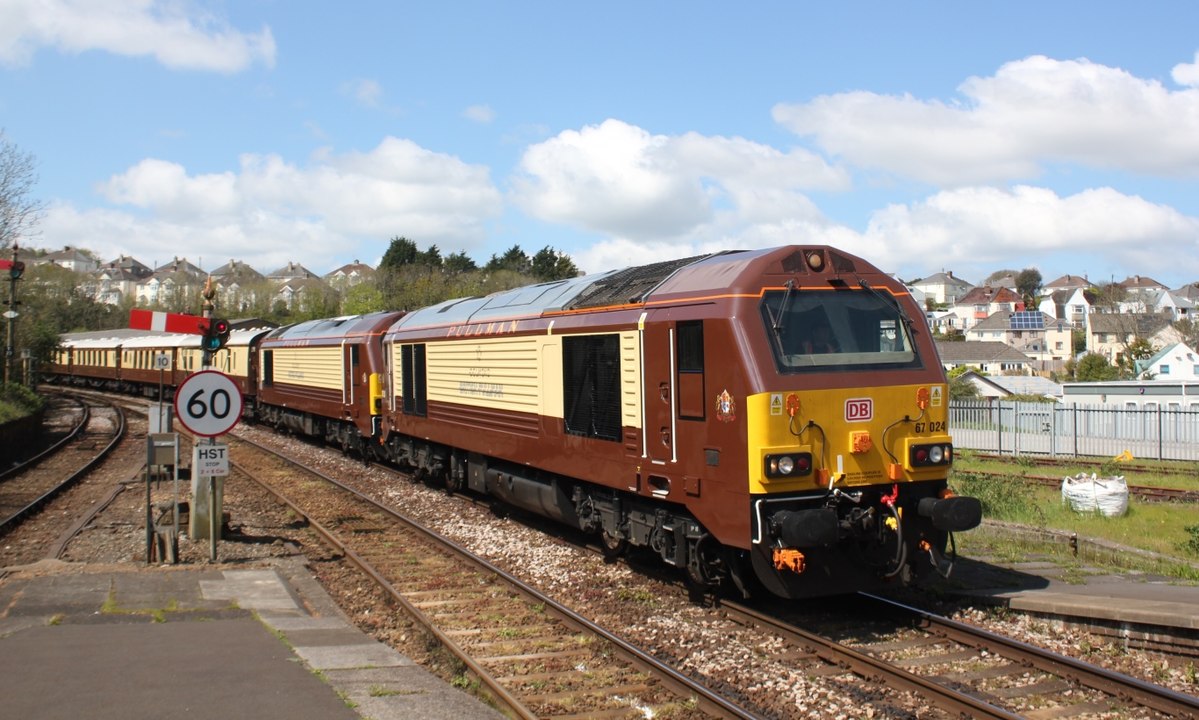 The train carriages were in different states of disrepair when they were bought, and they have all been diligently cleaned, reconditioned, and refitted. Originally known as Orient-Express Hotels Ltd., the company was renamed Belmond in 2014.

The name Pullman is derived from the American George Mortimer Pullman, who designed comfortable and luxurious train cars known as “palaces on wheels.” The idea of luxury train cars appealed to the British, and the British Pullman Car Company was founded soon after.

Each of the British Pullman train carriages has its unique history, and they have served in some of Europe’s most famous historic train services. The original Simplon-Orient-Express, Brighton Belle, Golden Arrow, and Queen of Scots Pullman are among them.

Some of the train carriages have also served as royal carriages, carrying members of the British royal family as well as other notable events such as state visits and Winston Churchill’s funeral. 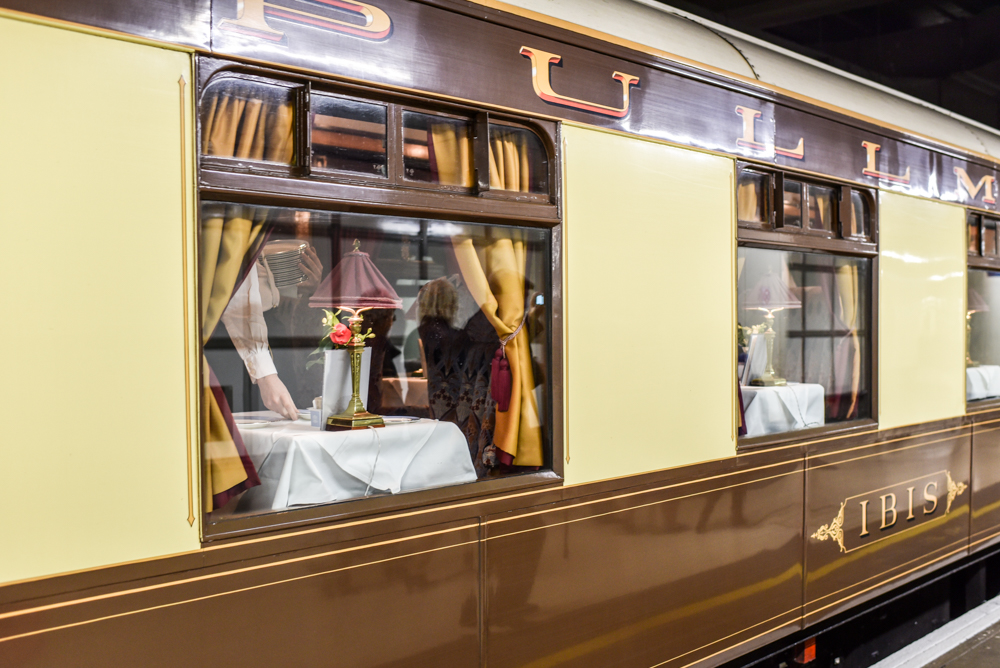 The Belmond British Pullman has 11 carriages, each with its unique personality and appeal. Each Pullman carriage has been meticulously restored to its former glory, and travelers will appreciate the antique-style marquetry, vintage lighting, and heritage upholstery.

The Belmond British Pullman is made up of vintage Pullman coaches from the 1920s to the 1950s. Minerva, for example, has fine Edwardian-style marquetry, Zena was used in the film Agatha, and Perseus served as famed British Prime Minister Winston Churchill’s funeral train in 1965.

What route does the British Pullman train take?

A journey aboard the British Pullman’s gleaming umber and cream carriages is designed to transport you back to the glamorous era of luxury train travel. The vintage carriages range in age from the 1920s to the 1950s and feature beautiful art deco cabinetry, art nouveau lighting, polished brass fittings, mosaic floors, and plush upholstery.

When you arrive in Derbyshire around midday, you will be escorted to Chatsworth by a coach. Explore ‘Capability’ Brown’s beautiful gardens, stop for refreshments at the cafe, and browse the extensive gift shop. The adventure continues as you board the train to return home. You are greeted with a champagne reception, followed by a five-course gastronomic dinner with wine from our sommelier’s selection. 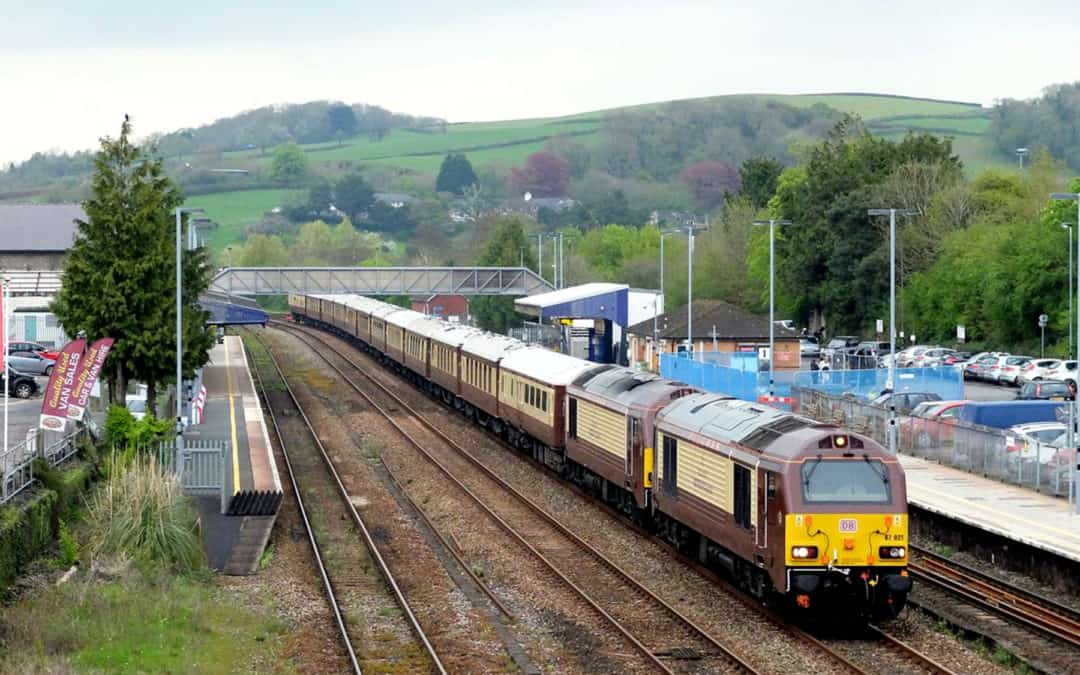 The British Pullman operates a variety of short trips across the United Kingdom, primarily in England, with most journeys beginning and ending at London Victoria station. On some train journeys, passengers stay aboard and enjoy a meal while watching the scenery pass by, while others travel to a destination.

The majority of trips are day trips, but the train does occasionally make overnight trips (called “Short Breaks”) in which guests stay in a hotel at the destination for a night or two. The train also serves as the first or last leg of a journey beginning or ending in London on the Venice-Simplon-Orient Express.

What are the seating arrangements on the British Pullman? 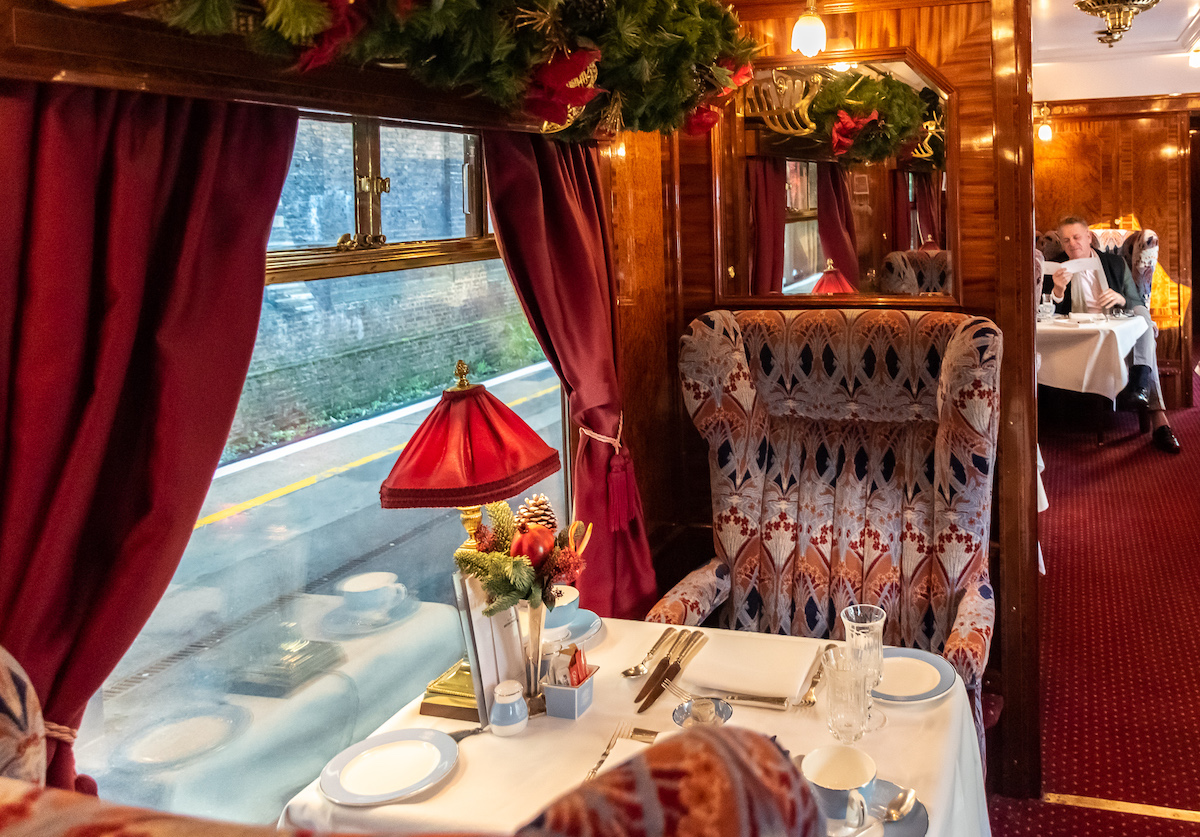 It should be noted that a party of two is normally seated at a two-person table, but couples may be assigned to share a table with another party of two on occasion. Parties larger than four will be split across multiple tables.

Everything in a train is the same, but the beauty of the British Pullman carriages is in the details. When you’re on board, look for the little details that make these train cars so unique. Some of these details are restored originals, while others are complete replacements or new details, as many of the cars were in poor condition when acquired or were not originally used as dining cars. 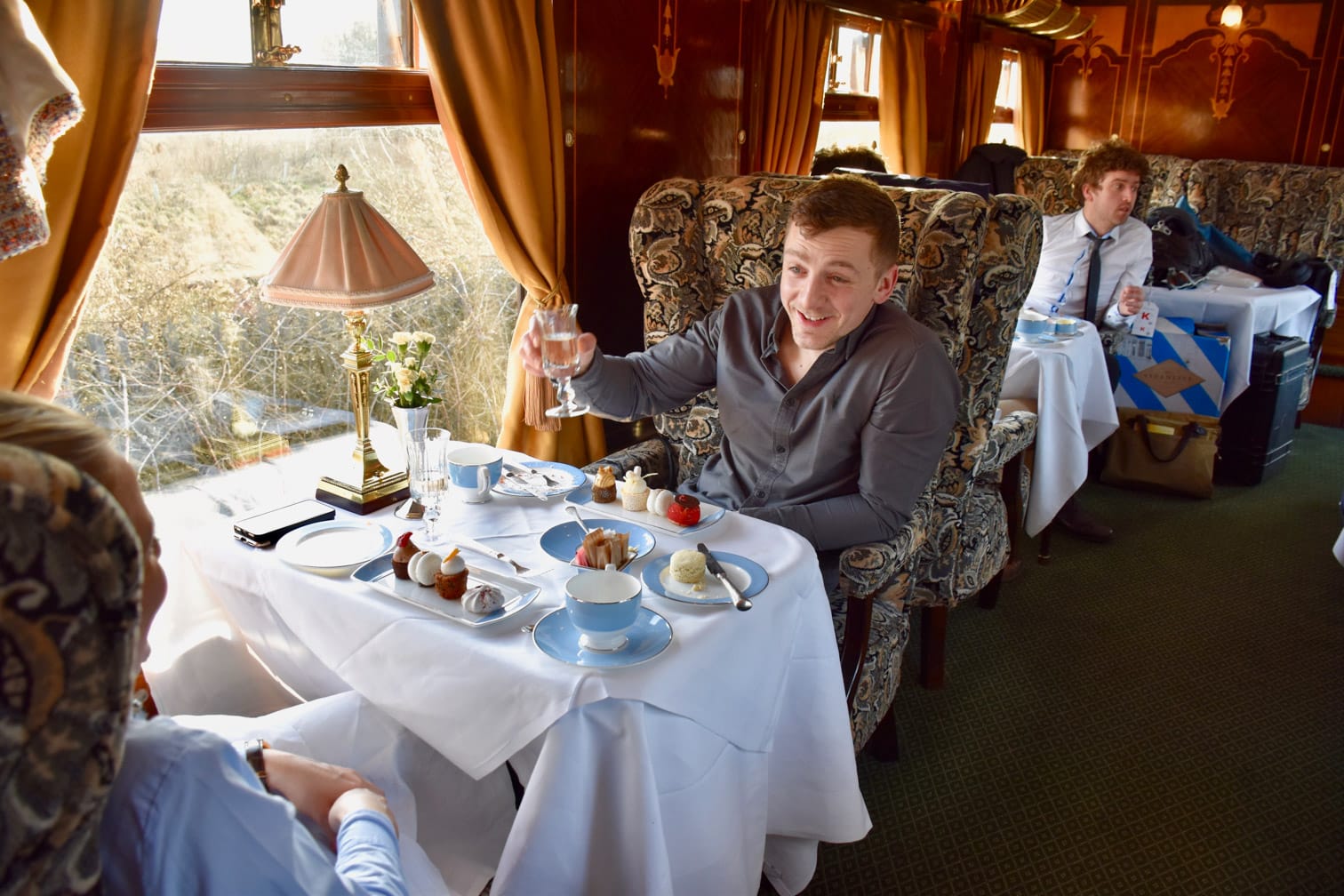 The beautiful art deco marquetry, brass lamps, luggage racks and fittings, beveled glass, velvet upholstery, and beautiful woodwork are details to look out for. Every train carriage has its design and style, so keep an eye out for the differences. For example, color schemes, upholstery patterns, fittings, and marquetry.

The bathrooms contain one of the most surprising and hidden details. Each train carriage typically has one lavatory on each end and a mosaic floor

Dining at the Belmond British Pullman is a work of art. The tables are dressed with starched white cloth, gleaming silverware, and sparkling crystal. Each course is paired with fine wines and champagnes chosen by the trained sommelier.

The sumptuous vintage carriages, each individually crafted with intricate marquetry panels and authentic period features, promise a fine-dining experience. Your table has been dressed in white linen, specially commissioned china, and sparkling-cut glassware. Liveried stewards serve a delicious three-course brunch and are on hand to meet all of your needs. Relax and enjoy the ever-changing views through your picture window. 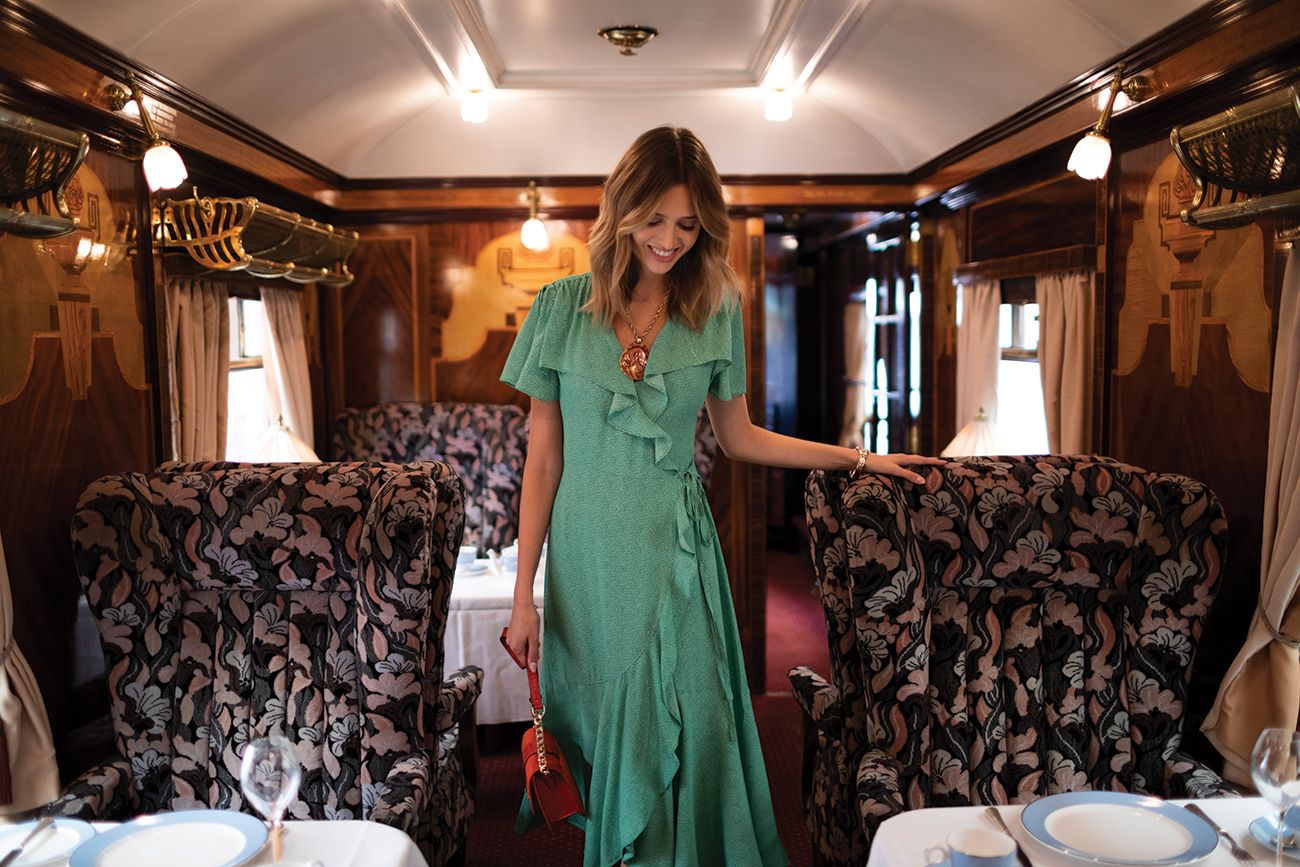 The Belmond British Pullman is made up of 11 lovingly restored cars from the 1920s and 1930s, all of which are dressed in an elegant cream and burnt umber livery. Each car seats 20-26 passengers, for a total of 226 on the train. Passengers are seated at tables for two or four, with a limited number of single tables and tables for three in one car. Because this is a daytime train, there are no sleeping accommodations.

Lunch is served to southbound passengers traveling from London to the Channel. A typical lunch menu might include seasonal soup with chive creme Fraiche, a seared fillet of herb-encrusted salmon with braised broad beans and smoked bacon, baby new potatoes with Noilly Prat sauce, and chocolate Jaffa Cake tart.

Northbound passengers traveling from the Channel to London board in time for afternoon tea and champagne. A typical tea menu might include finger sandwiches, warm scones with Devonshire clotted cream and strawberry jam, afternoon tea pastries, and a variety of teas and Colombian coffee. 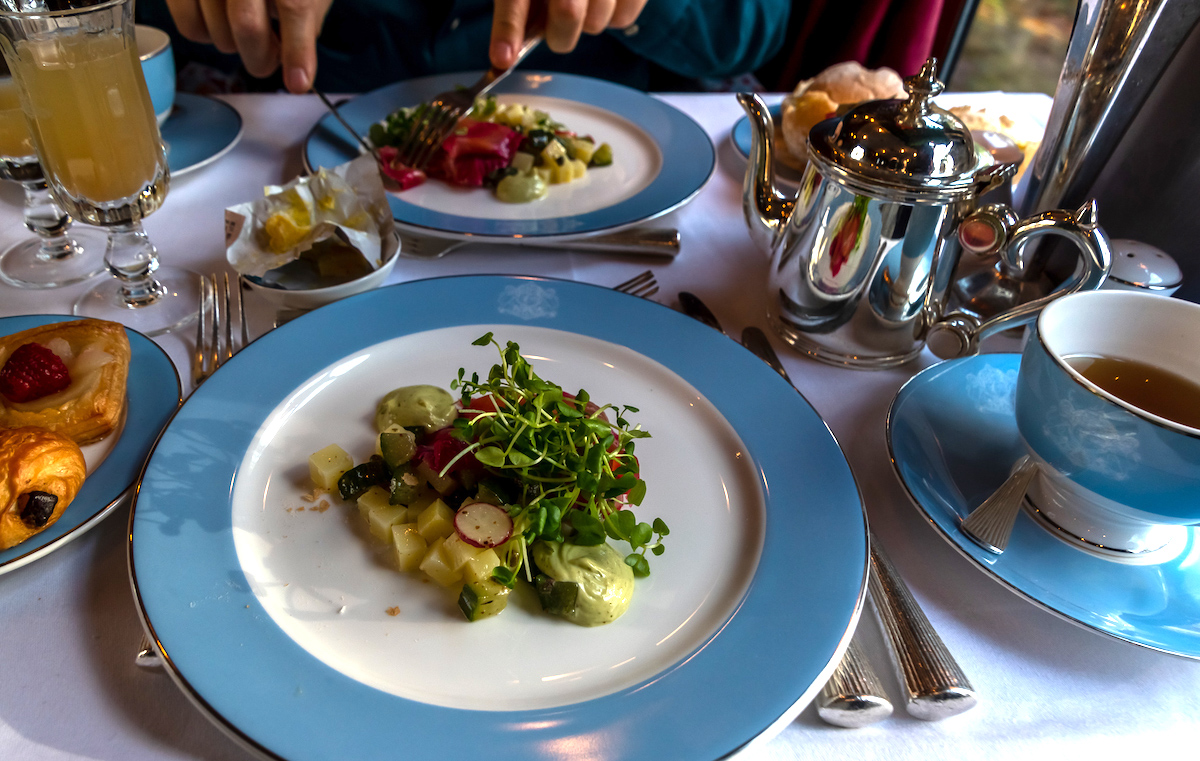 With the Belmond British Pullman, you can travel back in time to a golden age of luxury rail travel.

This elegant train is made up of immaculately restored Art Deco carriages, one of which dates back to 1925 and has been extensively used by the British Royal Family, as well as luminaries such as President de Gaulle and Nikita Khrushchev.

They are now used for enjoyable day trips and weekend breaks throughout England, such as to the magnificent cities of Bath and Canterbury, historic landmarks such as Chatsworth House and Blenheim Palace, and even the Grand National. Expect a sumptuous brunch en route, followed by a champagne reception and four-course dinner in London.

Belmond owns some of the world’s most recognizable hotels, trains, river cruises, and safaris.  Both properties like Belmond La Residence d’Angkor in Siem Reap and Cambodia, and enjoyed drinks at the Belmond Cipriani in Venice have been the pinnacle of 5-star luxury. 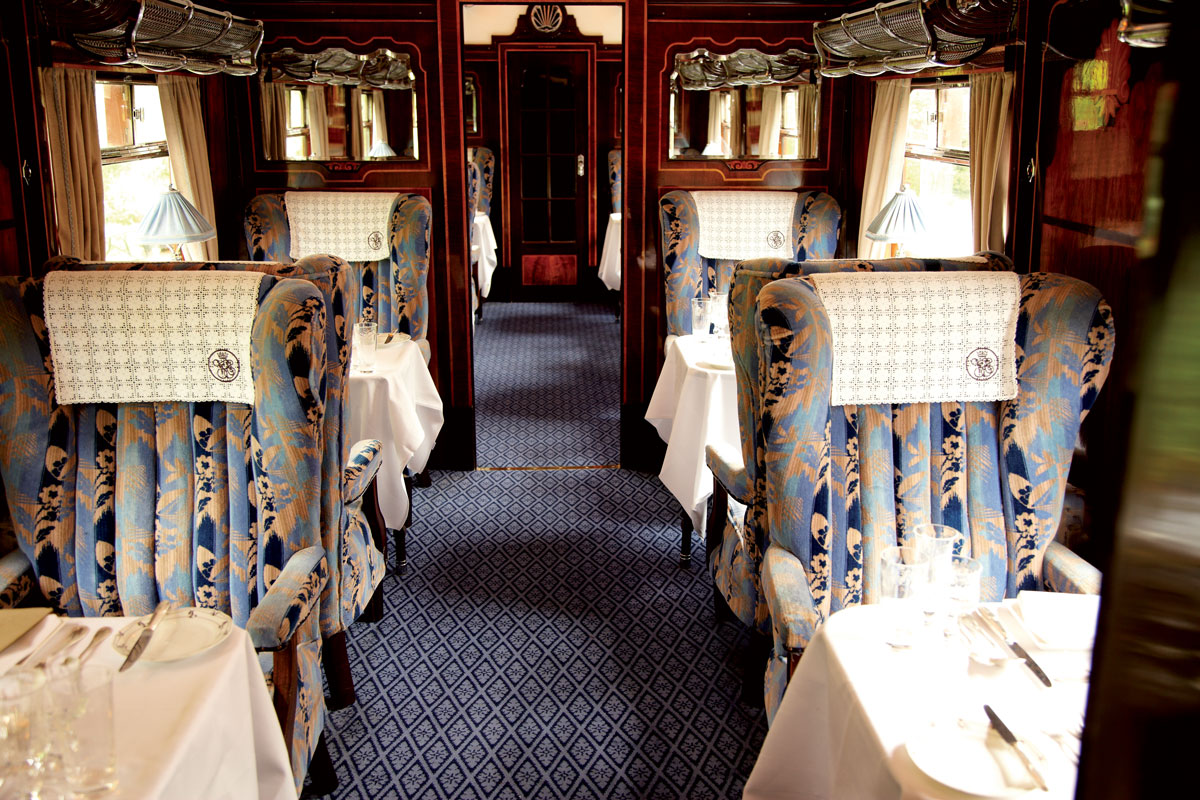 Alternatively, for the ultimate Belmond experience in London, stay at the Belmond Cadogan Place Hotel in the heart of Chelsea before your journey.

The Belmond British Pullman matches destinations to your tastes; feeds your artistic senses with music and magical works of art. Feast your eyes on a historic, horticultural, architectural, and literary banquet. And, of course, spoil your taste buds with the best food and wines.

What better way to commemorate any occasion than with a once-in-a-lifetime Pullman experience for you or someone special? These dazzling new excursions have been meticulously designed to ensure that you enjoy the sights and delights of both Britain and the Belmond British Pullman. Experience this magnificent train and texture of history in your own time.