There is a lot more than tigers, a wild safari, religious temples, etc. as it is an unending exploration for a visitor to Sariska National Park and Tiger Reserve at Alwar, Rajasthan. The great abode of the top and famous Bengal tigers are situate here on the hill slides of the mighty Aravallis.

For all of the visitors who seek adventure and thrilling holiday experience, the lush forests of Sariska is the best place to holiday. For the nature lovers and those who want a different experience from everyday life as well as other wildlife enthusiasts the Sariska National Park is one of the best places in the country.

Area – The Sariska National Park is spread across an area of 881 sq. km. of forest land.

Altitude – The Sariska National Park is situated at a height of 300 meters – 720 meters over sea level.

Geography – The Sariska National Park and Tiger Reserve is mostly made of scorn – thorn arid forests and rocky landscapes as well as dry shrubby grasslands and tropical forests with trees with broadened leaves, grassy landscapes with cliffs that are hilly.

Why is Sariska National Park and Tiger Reserve so famous?

One of the biggest highlights to visit the tourist attraction called Sariska National Park is the abode of Bengal Tigers. More than a decade earlier there were around 16 tigers recorded. However, due to hunting there was a decline of the numbers and later there was a detailed report about not even one Bengal tiger left in the Sariska Tiger Reserve.

After a long time, around the year 2012, a joint effort by the National Tiger Conservation Authority Project Tiger and the Rajasthan Forest Dept., the Tiger Reserve was on a re-population trial. In this project three tigers were brought in to Sariska and by 4 years later the number became 14 tigers in Sariska National Park & Tiger Reserve.

This sudden growth in the re-population in Sariska increased the tourism with wildlife enthusiasts, nature lovers, photographers, and tourists from all over the world. 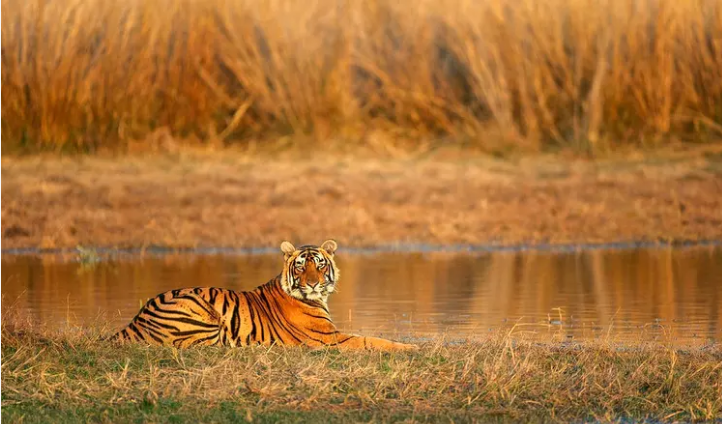 Winter is the best time to visit the Sariska National Park which is during the months of October and March. Rajasthan is a hot desert place so the summers would be too hot. During Monsoon season which is fro July to September, Sariska national park is generally closed during these months.

However, by taking permission beforehand from the forest authorities, there is a chance sometimes. So, visiting during the chill winter months makes the weather pleasant especially for activities like spotting wildlife and going on wild safaris.

The Sariska National Park & Tiger Reserve Safaris are held during two seasons and two separate time slots. The Sariska wildlife safaris are for four hours. If wildlife enthusiasts and nature lovers or photographers would like to spend time then a night or 2 days is an ideal duration for a trip to Sariska National Park & Tiger Reserve this is to check out major attractions like lakes, temples, spotting wild beasts, and searching the amazing range of wild flora & fauna and rare bird species in the National Park.

Also Read:  A Guide to Luxury Train Tours in India

Note: There are various other fees applicable for video shooting, camera fees, and vehicle fee, guide fee and all the fees vary as it is based on the type of camera, type of vehicle, etc.

Tourists or visitors can even hire the jeep or an open safari bus. They can get this done at the forest reception office situated opposite the hotel Sariska palace. Visitors are allowed to take their own private vehicle into the park for a wildlife safari sightseeing tour. However, at the entrance there is a fee that the guest or visitor has to pay and this varies on the type of vehicle.

Here are the different rates:

How to Reach Sariska National Park and Tiger Reserve

This famous tourist destination is easy to reach from the major cities like Jaipur, Rajasthan and Delhi. This is because of the number of various transport facilities available to reach the cities. Check it out.

The above two airports are connected with flights of various cities all over the country including Agra, Mumbai, Pune, Kolkatta and Chennai. From the airport traveler can take a train, bus or travel by taxi to reach the Sariska national park & tiger reserve.

The above two railway stations are connected with the Jaipur – Delhi Express Train to nearby cities. From there travelers can take a regular bus service or travel by taxi to reach the destination.

Traveling by bus to Sariska National Park is the most budget – friendly way to reach there. There are regular buses, private buses as well as government run bus services connecting Delhi & Jaipur to cities like Alwar & Sariska.

To reach Sariska National Park from Alwar take a share taxi or private taxi service to reach there.

If traveling by car the duration will be around four hours and is easy to cover the distance as there are well maintained State Highways & National Highways here.