The Ranthambore rings in the ears with roars of tigers freely roaming in their natural wild habitat, prowling to be spotted and mesmerized. Built on a land of 1334 sq km of area, Ranthambore is a wild jungle scrub hemmed in by rocky edges. The centre piece for this thrilling National Park is the infamous Ranthambore Fort, built in the 10th Century, yet still standing strong and imposing, dominating the sky-line of the picturesque park.

The fort is surrounded by temples, mosques, and lakes now populated with crocodiles scattered around it, along with eerie vine-laden chhatris which are ancient burial tombs. The park was once the hunting ground for the royals of Rajasthan. It was the Maharajas of Jaipur who hunted at this jungle before it was legally prohibited by the government post Indian independence. However, rumor has it that a Maharaja still used this land as his personal hunting ground until the early 70s, even after proclaiming the area as a sanctuary. Later conservationists strengthened the norms and the protection which has now stopped hunting and poaching of the animals. 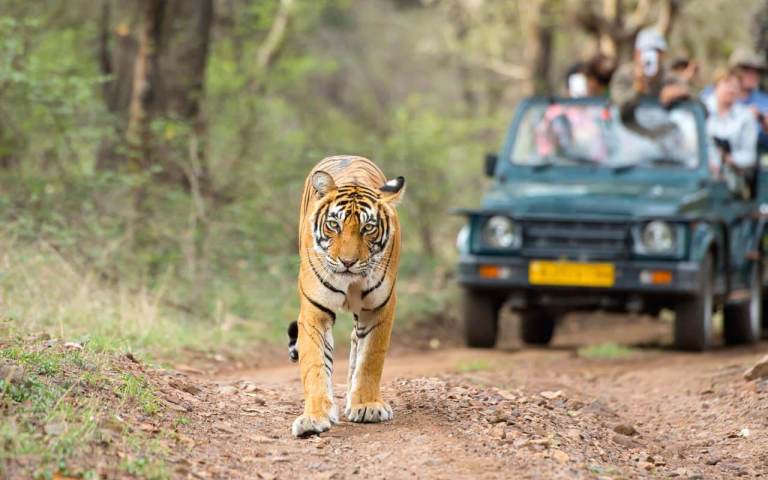 Presently, the fort along with the surrounding vast land area of dense jungle has been proclaimed a UNESCO World Heritage Site and is policed and secured from poachers and hunters by the authorities. While spotting tigers at their prowl was a rare occurrence even a few years ago, is now a frequent site thanks to the diligent conservational works of the ecologists and zoologists. Apart from the infamous jungle cat, there are plenty other animal special to see at Ranthambore too, like above 300 species of birds, apes, deers and many more.

The forest grew in area upon the recent merging of nearby forests of Sawai Man Singh Sanctuary and Kaldevi Sanctuary, in order to ensure animal protection, which made this park the largest in the country. as a traveler prepare to witness breath-taking panoramic views of alternating deciduous forests, interrupted by swathes of grasslands, flanked by the Banas River in the north and the Chambal River in the southern parts.

Table of Contents hide
All you need to know about Jungle Safaris at Ranthambore:
Timings of Safari Rides and Their Durations
Best Time to Visit Ranthambore National Park
Ticket Prices
How to Reach Ranthambore

All you need to know about Jungle Safaris at Ranthambore:

Two types of safari rides across the jungle is available – Jeep safari and Canter Safari.

Also Read:  How to Reach Jodhpur

The jeep-safari offers the four-wheeled Gypsy drive through the park, which is a 6-seater vehicle. This ride is especially recommendable for wildlife photographers and nature photography. The all side open Gypsy is perfect for clicking pictures in the jungle of wild-lings sighted almost at eye-level. The odds of spotting a tiger is also increased with this safari ride as the Gypsy being a smaller vehicle can take on narrow winding paths around jungle and cover more territory. Furthermore, with only 5 other co-passengers travelers can request stopping points as per their preference. 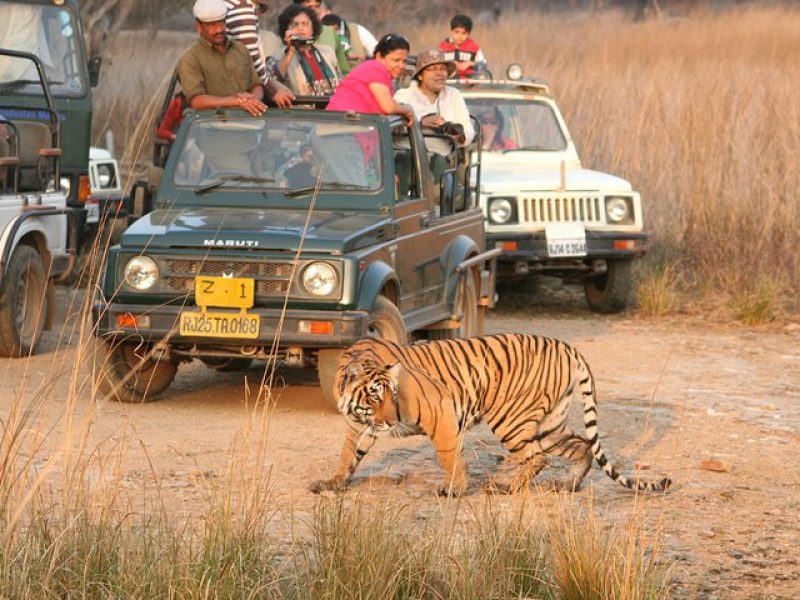 The canter safari is a 20-seater ride and is yet another option to explore the intriguing topography of the jungle. However it is strongly recommended that one books this safari well in advance as it gets fully booked quite fast.
While sightings of the infamous jungle cat for which Ranthambore is famous, is a matter of luck. But the sightings of other animals like leopards and deers are quite frequent especially near the water bodies. The ride is a three and half hour journey through the park and is the best way to explore the diverse topography. 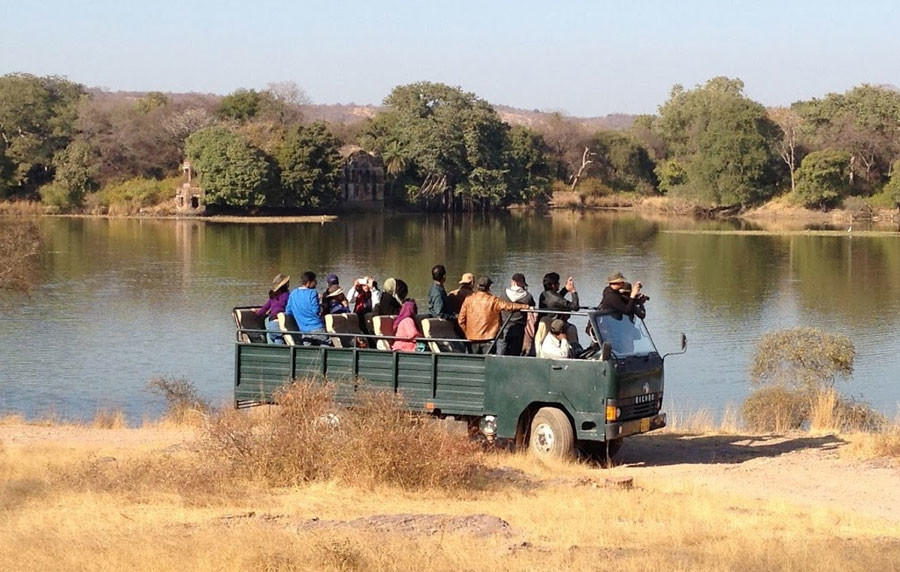 Timings of Safari Rides and Their Durations

The best months to visit Ranthambore are between October to March as the weather remains pleasant and exploring the place is comfortable for the tourists. The hottest months are April and May where temperatures soar up to 45 degree Celsius. The period of July to September should be avoided as the park remains closed during this time and no one can enter the area.

Also Read : How to Book Tickets in Royal Rajasthan on Wheels?

How to Reach Ranthambore

The national park is located close to Sawai Madhopur which is the nearest township. While there are several places to stay near the town, for those seeking a different experience can embark on the enchanting journey of the Indian Panorama aboard the Maharajas Express. It is a 7 night 8 day trip across the most popular spots of northern India, covering Delhi – Jaipur – Ranthambore – Fatehpur Sikri – Agra – Gwalior – Khajuraho – Varanasi – Lucknow – and then back to Delhi. The third day of the journey takes passengers to a guided trip to Ranthambore and then to the mysterious ghost town of Fatehpur Sikri, which is yet another UNESCO World Heritage site.

Also Read : Luxury Train Trips Are a Perfect Way to See the India

Experience this beautiful wildlife destination with Luxury Journey of :