The prestigious World Travel Awards saw yet another year of India’s proud hospitality with the recognition received by the Deccan Odyssey. The special train was titled at this function as ‘Asia’s Leading Luxury Train’, for the 5th time in a row. It is one of the premiere luxury trains running several majestic tours in the southern part of the country and is known for its exemplary services. This prestigious ceremony, highly coveted in the tours and travels and hospitality sector around the world was held at an equally grand venue of the Intercontinental Grand Stanford Hong Kong, on September 3, 2018.

The award function was a gala event where the tour and travel operators gathered from all around the world. Speaking on this prestigious recognition, Arup Sen, Director, Special Projects, Cox & Kings said, “the Deccan Odyssey has surpassed the definition of luxury with its unparalleled service and stunning interiors that not only offers unimaginable comfort but also a rare window to India’s rich heritage. The WTAs acknowledges the train’s excellence in offering unique experiences and extraordinary journeys.” 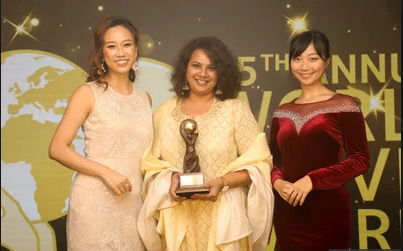 While the other prominent luxury trains running in India tours most of the famous tourist spots in the north. The Deccan Odyssey is the only luxury train passing through the finest tourist attractions of the south, thus, provides a glimpse into the little known cultural aspects of the rich heritage of southern India.

The palatial train offers tourists with 6 itinerary options to choose from, for embarking on an enchanting journey. The train passes through the Indian states of Gujarat, Maharashtra, Rajasthan, Karnataka, Goa, Andhra Pradesh and Delhi based on the itinerary one chooses.

The interior of the train is decked with modern state-of-the-art amenities fit for kings and carries, four large Presidential suites. Along with them are two gourmet 5 Star restaurants serving delicious cuisines ­ – Waavar and Utsav. The train also has a well-stocked full bar and lounge space for guests to relax, along with a spa and a beauty salon.

Some other features of the luxury train includes round the Wi-Fi connectivity, phones and LCD satellite TVs in every room, butler and attendants, running hot and cold water, climate controlled spaces and much more.

The WTAs which is often considered as the Oscars for the tourism industry, celebrates true excellence in the field and a title such as this is a bonafide mark of comfort, lavishness and great service.

The Deccan Odyssey is a special luxury train traveling around the southern states of India, based on the model of the Palace on Wheels – the first luxury train in the country. It is a joint venture of the Maharashtra Government and the Ministry of Railways, Government of India. The train has 21 coaches, out them 12 are passenger coaches with accommodations of 8 people per coach, 1 fully equipped conference and/or entertainment car, 2 dining cars, 2 generator cars with luggage storage, 2 staff cars, 1 spa car, and 1 bar car. The total capacity of the carriage is 88 passengers.

You may also read related news: