4 Best Trains from Delhi to Mumbai

Planning on a savvy train trip from Delhi to Mumbai? We’ve got you covered. By traveling through trains, you can not only enjoy your trip to the fullest, but you can also save a lot of money and arrive at your destination overnight in just 16 hours.

Must about running trains from Delhi:

But there are a few things you should know before going further :

Must Read : 10 Reasons Why We Love to travel in Train

Traveling from Delhi to Mumbai by Train

The train runs from the New Delhi Railway Station at 4.25 pm in the evening at reaches Mumbai Central at 8.15 am in the morning. It runs overnight and there are minimal stops on the way for this train. The total number of stops is just 6. The fare is divided into 3 tiers. The ticket price for 1AC is 4,760 rupees per head. The 1AC is first sleeper class and fully air-conditioned. Then comes 2A which is a two-tier, fully air-conditioned sleeper coach. The ticket fare is 2,830 rupees minimum and 4,073 rupees maximum per head. The last tier is the 3A which is also a sleeper coach and fully air-conditioned.

Also Read:  Rajdhani Express Get Turned into 50, a Great Treat was Enjoyed by Passengers

However, 3A is relatively cheaper than the other two tiers. The ticket price for 3A is 2,070 rupees minimum and 2,753 rupees maximum. The train provides its commuters with facilities like pillows, blankets, hand towels, and meals.

Rajdhani Express runs on a daily basis and it’s widely known for its cleanliness and punctuality. The tickets are mostly available all the time as there is no hustle-bustle here. Foreign Tourist Quota also gets a fair number. Generally, it reaches its destination on time.

However, there have been some instances where it reaches a few minutes behind its schedule. 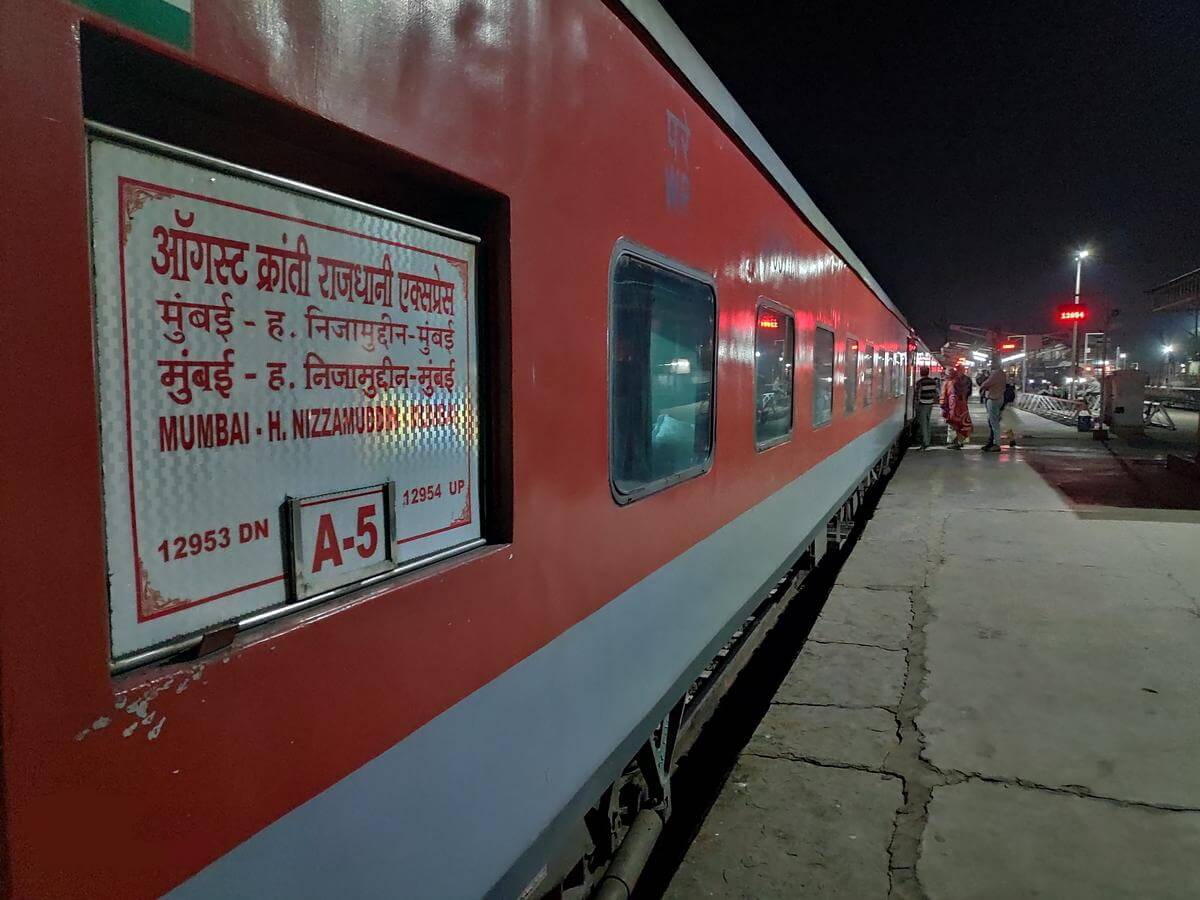 The inaugural tour of this train was done on 1st January 1992. It starts from H. Nizamuddin at 04:50 pm and reaches Mumbai Central at 09:45 am. The train has a total of 20 coaches, including two coaches for luggage and generator, five coaches for AC 2 Tier, eleven coaches for AC 3 tier, one first-class AC car, and a pantry van.  The train offers a special tourist quota as well. There is no fare difference as the other Rajdhani trains.

But the August Kranti Rajdhani halts at 12 different stations and apparently takes a little more time to reach Mumbai than usual. However, it’s a highly punctual train. The ticket has to be booked in advance for the journey.

Booking for this train starts 120 days in advance. You can book your ticket and make reservations online as well. The passengers can avail facilities like meals, blankets, pillows, etc.

The New Delhi-Mumbai Central Duronto Express is also known as the New Delhi AC Duronto Express. It’s a fully air-conditioned train that runs between New Delhi and Mumbai. It halts at only 4-5 stations for a short time. It didn’t use to make any commercial halts earlier. 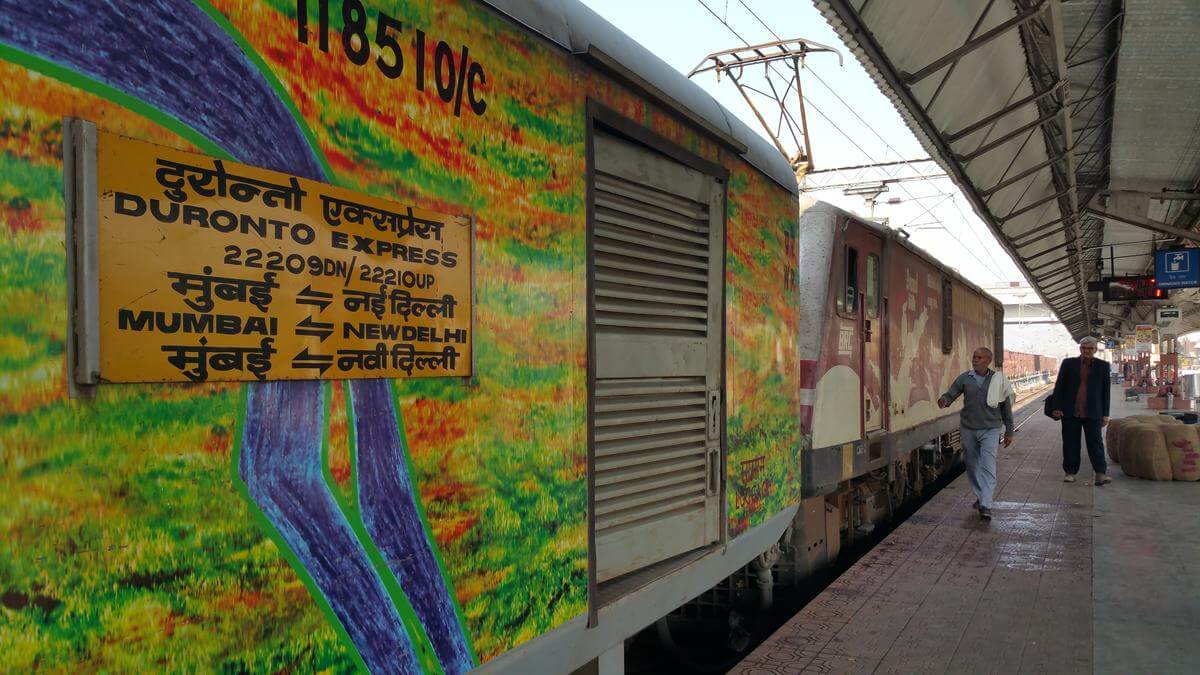 But the train makes commercial halts at Vadodara, Ratlam and in Kota. The train that originates from Mumbai is Mumbai-New Delhi Duronto Express with train number 22209.  Duronto expresses are known to travel faster than Rajdhani expresses.

However, there is no frequency in their running and the timetables aren’t very handy as well. The train departs from New Delhi railway station at 11:25 pm on Tuesday and Saturday. It arrives at Mumbai Central at 04:14 pm the next day. The train is relatively faster than Rajdhani express. Tickets can be booked both offline and online. The fair is almost the same as Rajdhani expresses. The train provides facilities like fresh meals, blankets, pillows, clean coaches, etc. There is a foreign tourist quota available too.

Also Read : Booking Train Tickets for Travel in India – All You Need To Know

The all-new Rajdhani Express that runs from Hazrat Nizamuddin to Bandra Terminus is the fastest train from Delhi to Mumbai. It originates from Hazrat Nizamuddin railway station on Wednesday, Friday, and Sunday at a fixed time, i.e., 4:15 pm and arrives at the Bandra Terminus in Mumbai at 6:10 pm the next day. It takes a time span of 14 hours for the journey with three stops on its way.

Though faster than any other train, this train does not run on a frequent basis throughout the year. It started in mid-2017 because of an increase in the crowd. The ticket price is apparently higher than other Rajdhani Trains.

Must Read : Different Types of Trains in India

The train provides facilities like meals, fresh towels, blankets, etc. The cleanliness in the coaches is up to the mark and there is no hassle for ticket availability as well. The train is punctual as the others.

Apart from these regular trains, there are two special luxury trains that travel from New Delhi to Mumbai. The sole purpose of these trains is to promote tourism in India and Maharashtra happens to one of the most valuable tourist spots in India.

Thus, these trains originate from New Delhi and traverse straight to Mumbai, along with traveling to a few other tourist destinations that are included in the itinerary.

Today, in the era of super-fast trains, let’s explore the most luxurious trains in India that run from Delhi to Mumbai or Vice Varsa, allowing you to travel like a royalty. The journey of these trains offers unparalleled comfort onboard, allowing visitors to explore India’s most popular destinations within a week.

Faq on Delhi to Mumbai Train

Q1. Which is the fastest train from Delhi to Mumbai?

Q2. What is the departure time of the first train from Delhi to Mumbai?

Q3. Which is the last train to Mumbai from Delhi?

A. NZM TVC Superfast Express is The last train to Mumbai from Delhi which leaves Delhi at 23.40 hours.

Q4. From which stations in Delhi, we can board the train to Mumbai?

Q5. What are the deboarding stations in Mumbai for Delhi Mumbai trains?

Q6. How many trains run every day Between Delhi to Mumbai?

A. Every day there are seven trains run from Delhi to Mumbai.

Q7. What is the distance that covered to reach Delhi to Mumbai?

A. The train, which travels between Delhi to Mumbai, has to cover a distance of 1409 km.

Q8. What is the affordable option to book a train ticket between Delhi and Mumbai?

A. Online ticket booking is an affordable option always.

Q9. Which is the slowest train between Delhi and Mumbai?

A. DEHRADUN EXP (19019) is the slowest train considered between Delhi to Mumbai.

Q10. How many trains are there from Delhi to Mumbai each week?

A. There are 60 trains weekly run between Delhi to Mumbai.