History has decorated the world with majestic palaces, opulent forts and ancient monuments. The incredible historical sites depict the tales of bravery, romance and battles. You will get the essence of ancient civilizations from breathtaking and amazing historical monuments and forts.

Mind-blowing historical sites welcome you at different corners of the world. A history lover can’t resist himself to rush to see amazing stuff built over thousands of years ago.

This article depicts the best historical places in the world for a perfect historical gateway. 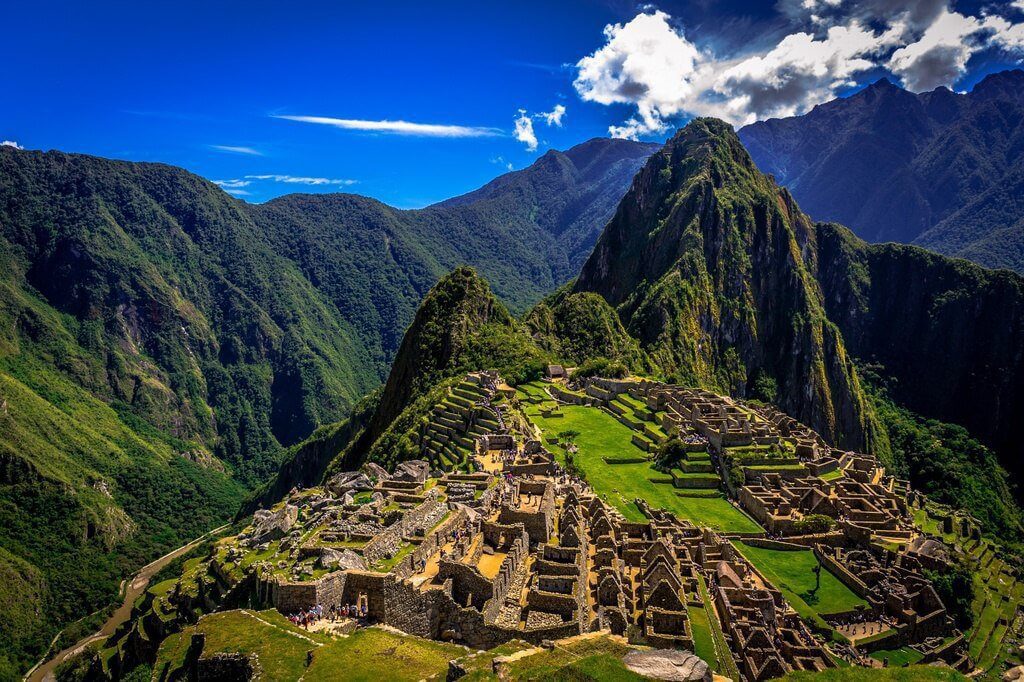 While Bingham was searching ‘The Lost City of Incas’, Vilcabamba, he discovered Machu Picchu with the help of Melchor Arteaga. Machu Picchu was the hidden capital of Inca civilization, which after being invaded by the Spanish, had escaped to Machu Picchu.

Tikal is a National Park situated at the northern part of the region Peten, Guatemala. Tikal is one of the major historical sites of Mayan civilization. The ceremonial centre of Mayan Civiliztion ( 6th century B.C.- 10th century A.D.) was declared as a World Heritage Site in 1979. 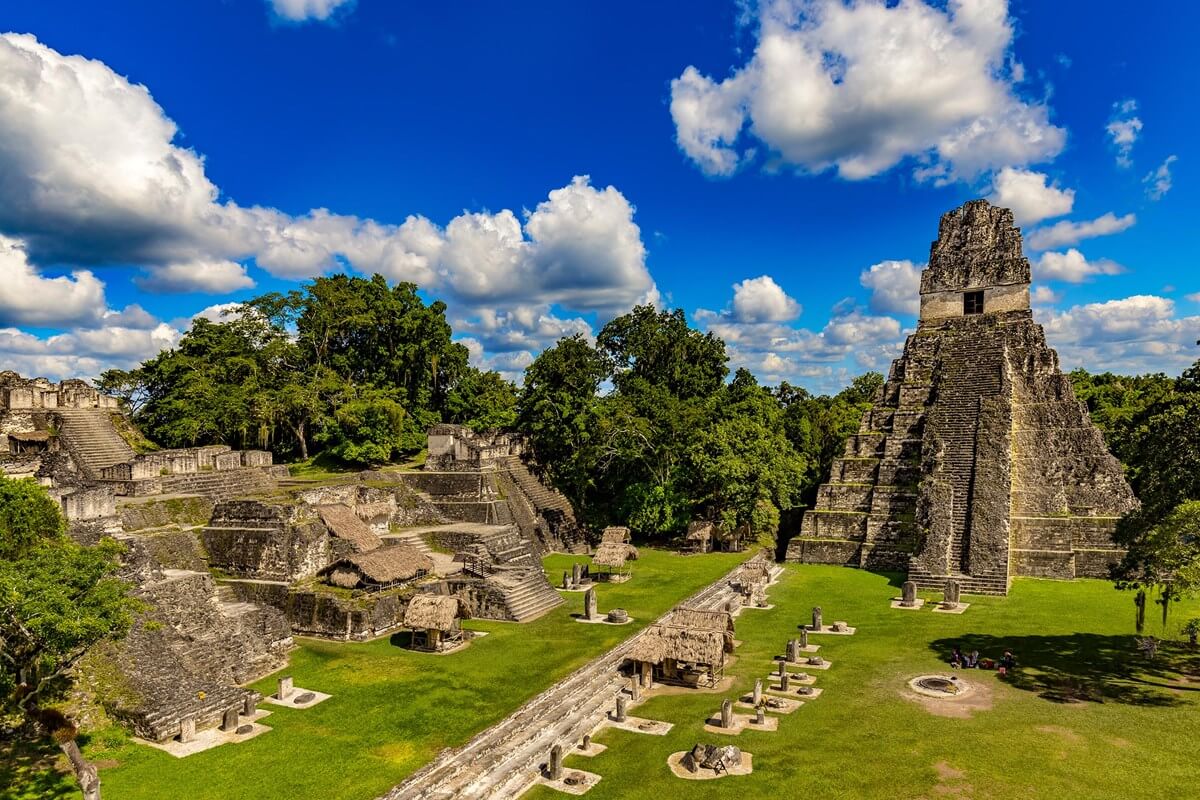 Tikal National park is famous for its archeological importance and astonishing bio-diversity. Tikal National Park consists of savannah, architectural remains of the Mayan civilization and palm forests. The diverse ecosystems are habitats of 300 species of birds, several species of cats, monkeys and trees.

The Pyramids at Giza, built 4,500 years ago, are ruins of Egypt’s old kingdom. The Great Pyramid, one of the Seven Wonders of the World, is located on the Giza Plateau near Cairo. The height of the Pyramid is 479 feet and its base measures 754 feet. 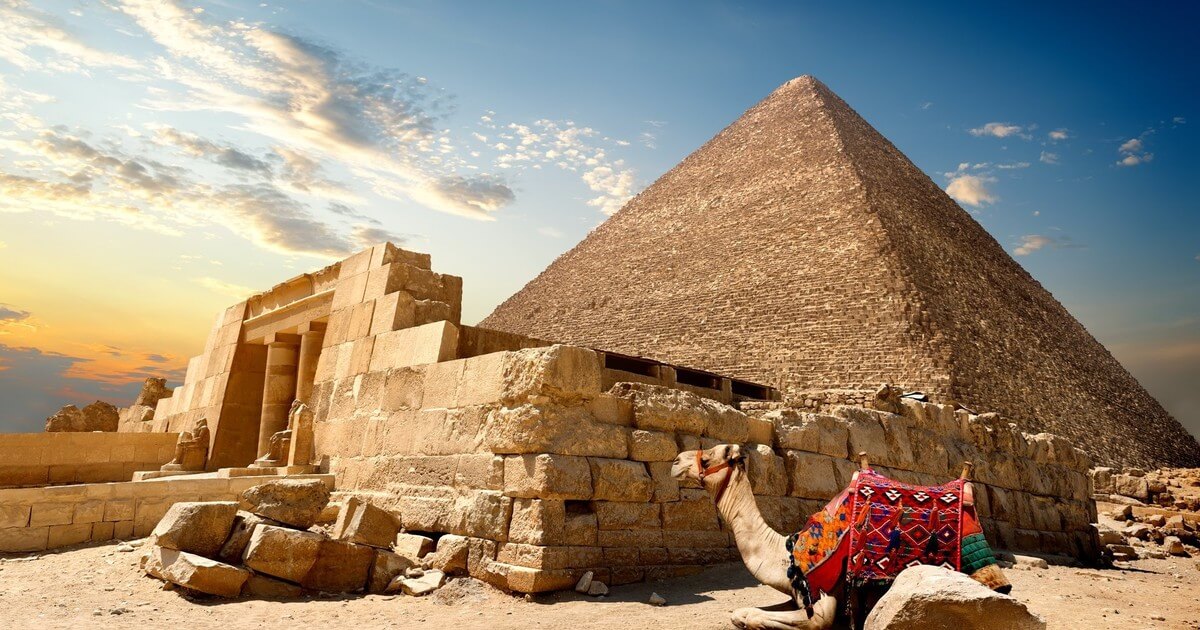 The pyramid is made up of over 2 million blocks of stone. The Great Pyramid of Giza is the oldest of three pyramids at Giza. The pyramids were built for three different pharaohs: Khufu, Khafre and Menkaure.

According to the historians, pyramids serve as a stairway to pharaohs to reach the heavens or pyramids symbolize sunrays reaching the earth.

Angkor Wat meaning ‘city of temples’ is regarded as the eighth wonder of the world. It was constructed in the 12th century. This once lost city contains 1000 archeological sites. French adventurer Henri Manhout discovered Angkor in 1860 when this lost city showed to the world its inner beauty. The area covered by Angkor Wat is 400 sq.km. 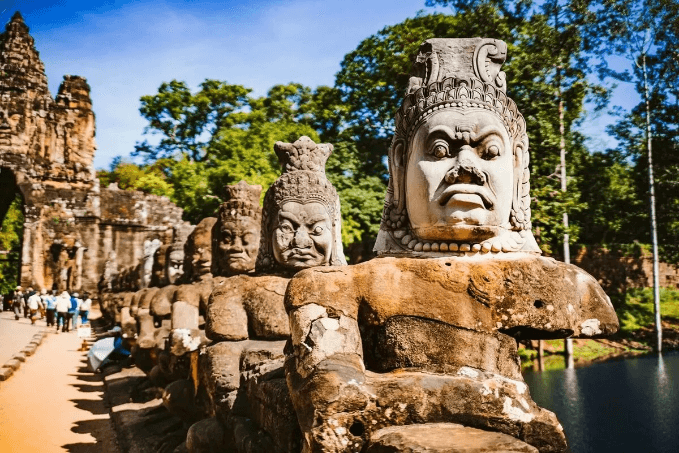 Timing: Early morning is the best time to visit

The Taj Mahal, one of the most beautiful buildings of the world, shows an enduring love of Shah Jahan, the Mughal Emperor, for his favorite wife, Mumtaz Mahal. The Taj Mahal is an immense mausoleum of white marble, located at the right side of the Yammuna river. The Taj Mahal was declared as a UNESCO World Heritage Site in 1983. This mausoleum was a winner of New 7 Wonders of the World. It was built in 1600s. 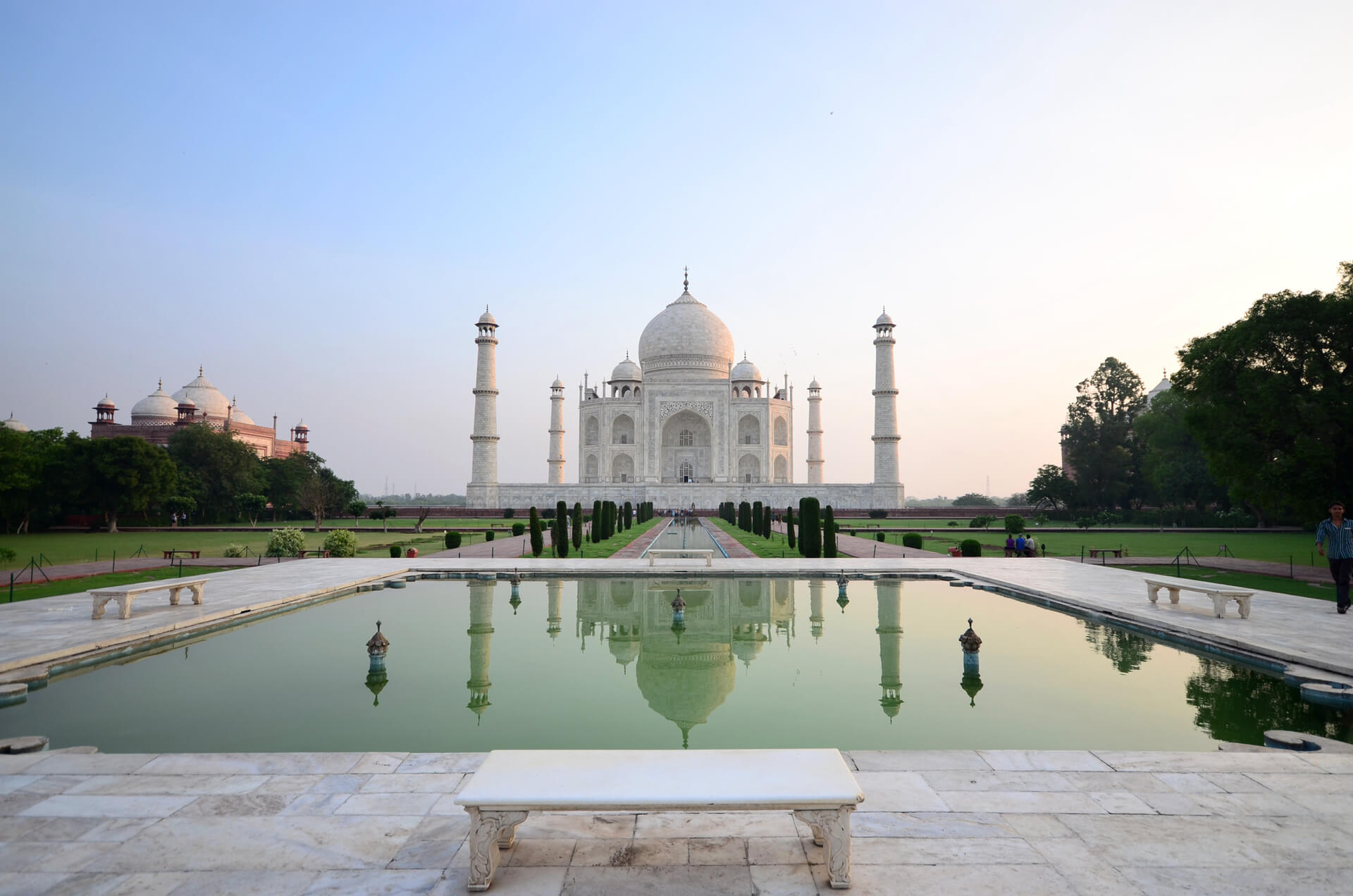 Recently, air pollution is posing a threat to the beauty of the Taj Mahal. The Taj Mahal symbolizes the excellent craftsmanship and the finest architectural achievement. It has unique aesthetic quality.

Timing: 8a.m. -5p.m. from Sunday to Saturday except Friday

Petra or Raqmu is located between the Red Sea and the Dead Sea. Petra depicts a lost civilization of Nabateans, a nomadic desert people. Petra connected camel caravans between the Arabian Sea and the Mediterranean Sea. Mountains with gorges and passages surrounded Petra, which is half-carved into the rock. 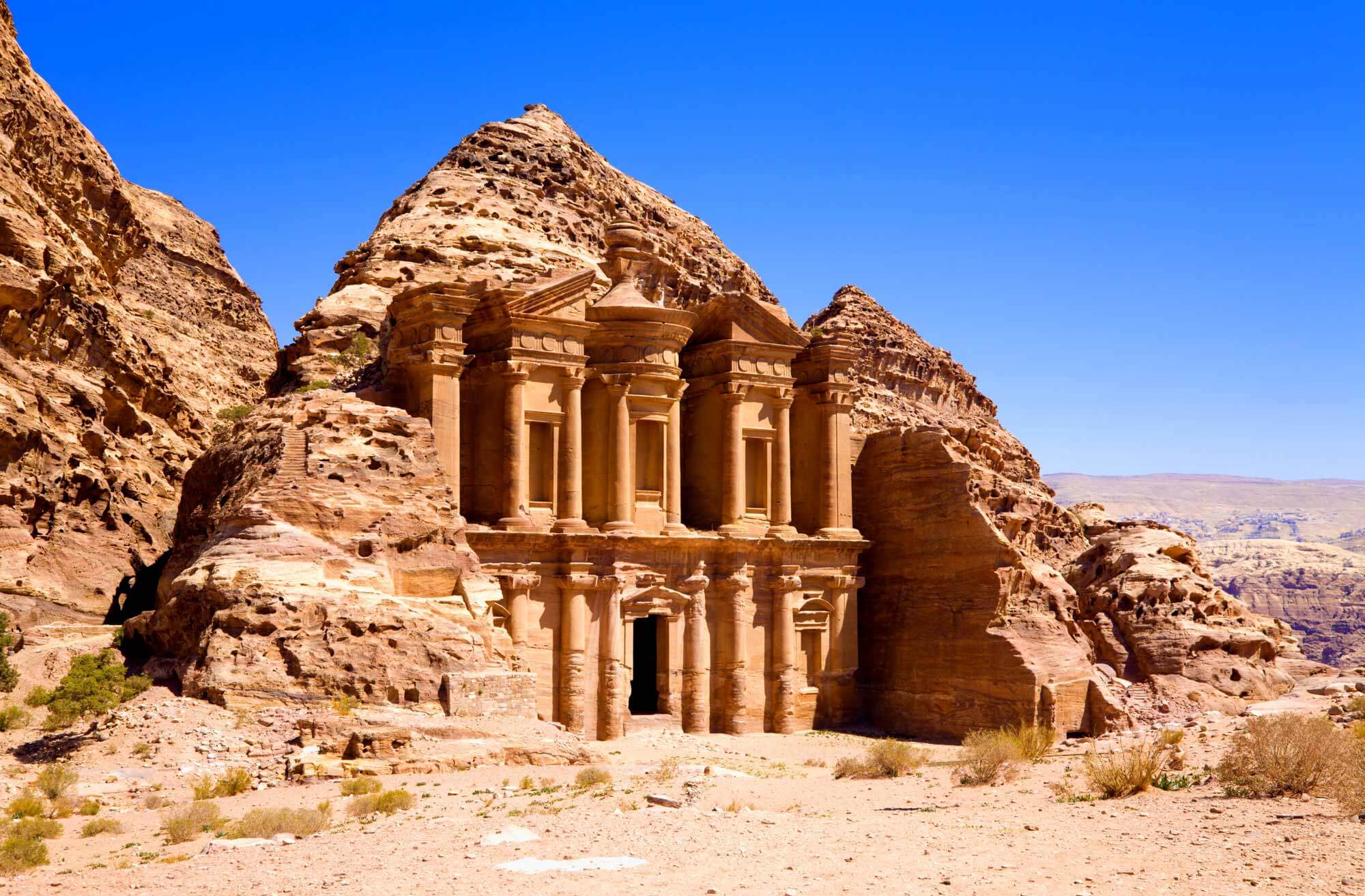 Petra is a blend of Eastern traditions with Hellenistic architecture and is regarded as the world’s largest archeological sites. It is a red sandstone landscape. Petra is famous for its rock cut architecture and water channel system.

Petra is also known as the Rose City because of the colour of its stone.

The world’s most well-known prehistoric monuments is Stonehenge. The construction of Stonehenge began 5,000 years ago. It was built in many stages. There is a stone circle at the centre of the monument. The stone circle was built in the late Neolithic period. Several burial mounds were constructed nearby in the early Bronze Age. Stonehenge comprises of 100 massive erect stones arranged in a circular manner. 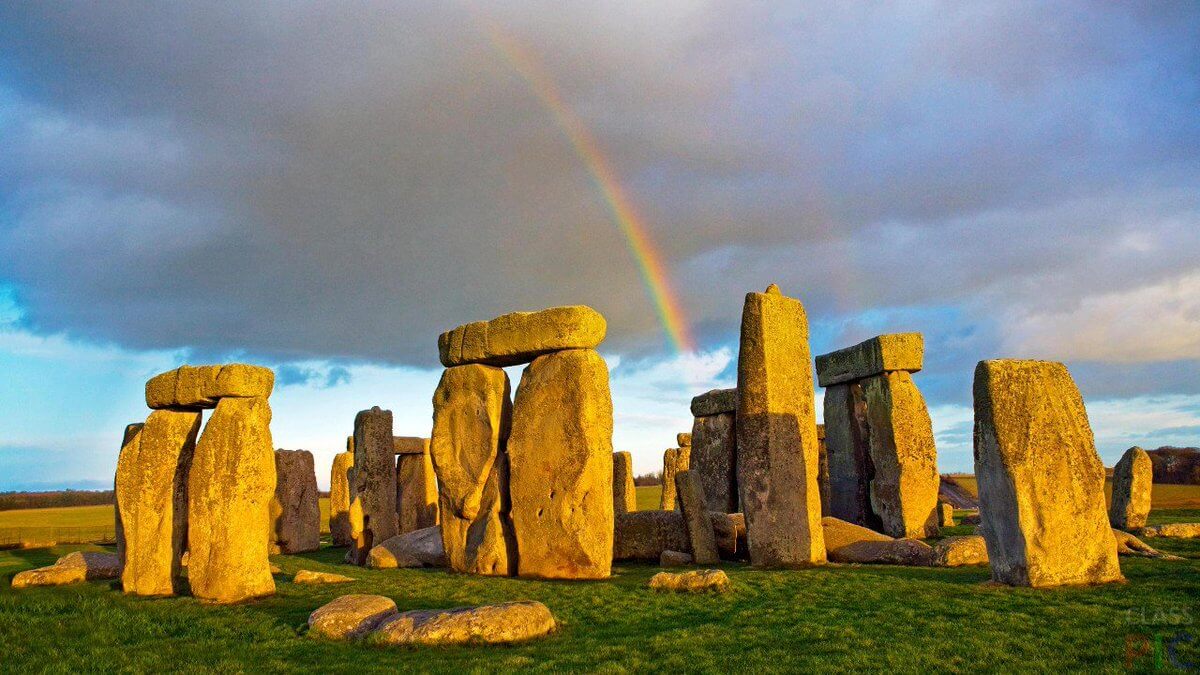 According to historians, Stonehenge was a burial ground. Stonehenge now attracts 1 million people every year. In 1986, it was designated as UNESCO World Heritage Site.

The Colosseum is the largest amphitheatre in Rome as well as in the world. It was built in between 70-80 A.D. Its construction started during Emperor Vespasian and ended during Emperor Titus. There is an arrangement of 50,000 seats for people. The Colosseum in Rome stands 189 metres long, 57 metres tall, and 156 metres wide. 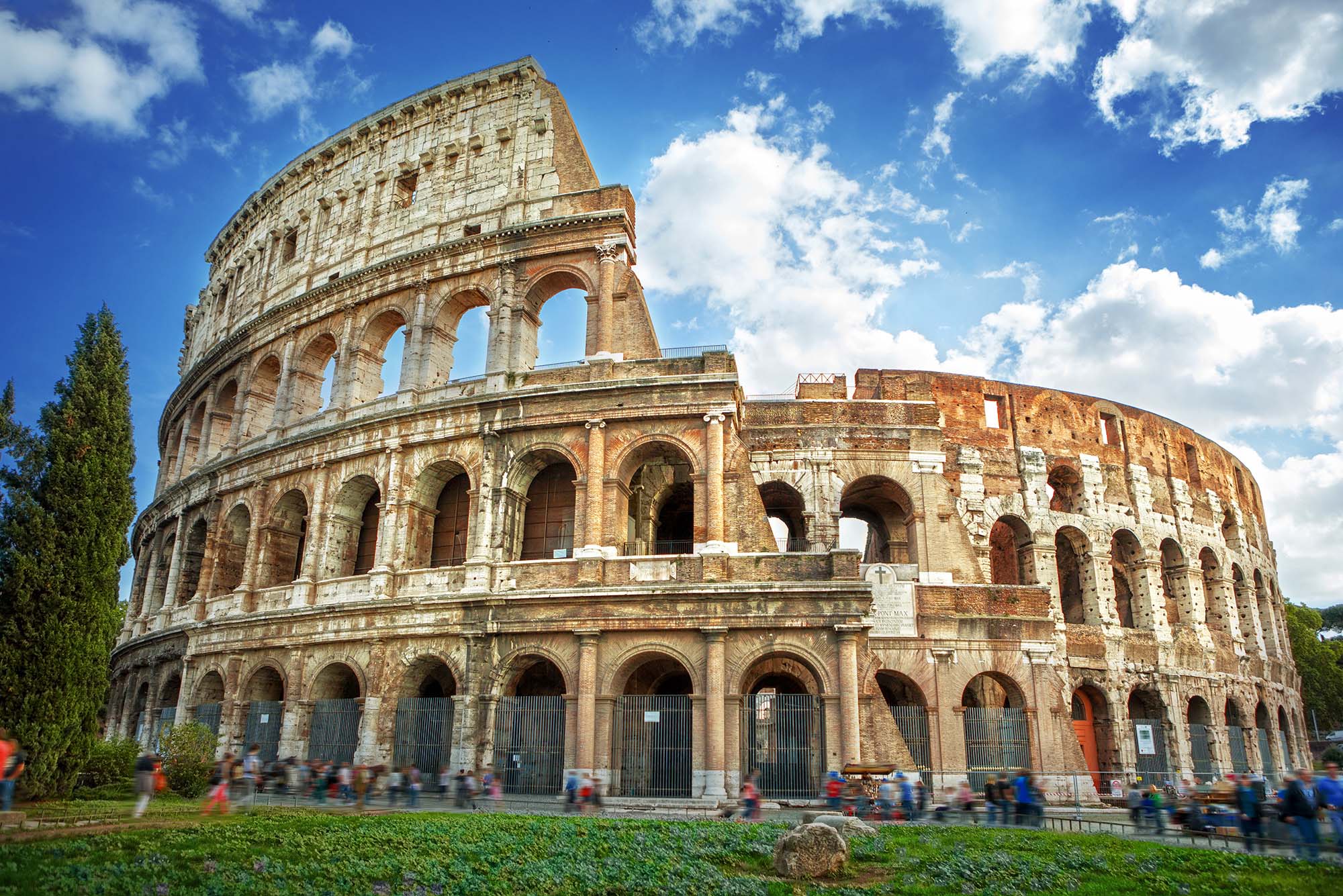 Easter Island, situated at the southeastern Pacific Ocean, is famous for 1000 monumental statues. These monuments called moai were built by Ropa Nui people. After the fall of moai culture, Easter Island developed a culture of bird worship. Easter Island was declared as the UNESCO World Heritage Site in 1995. 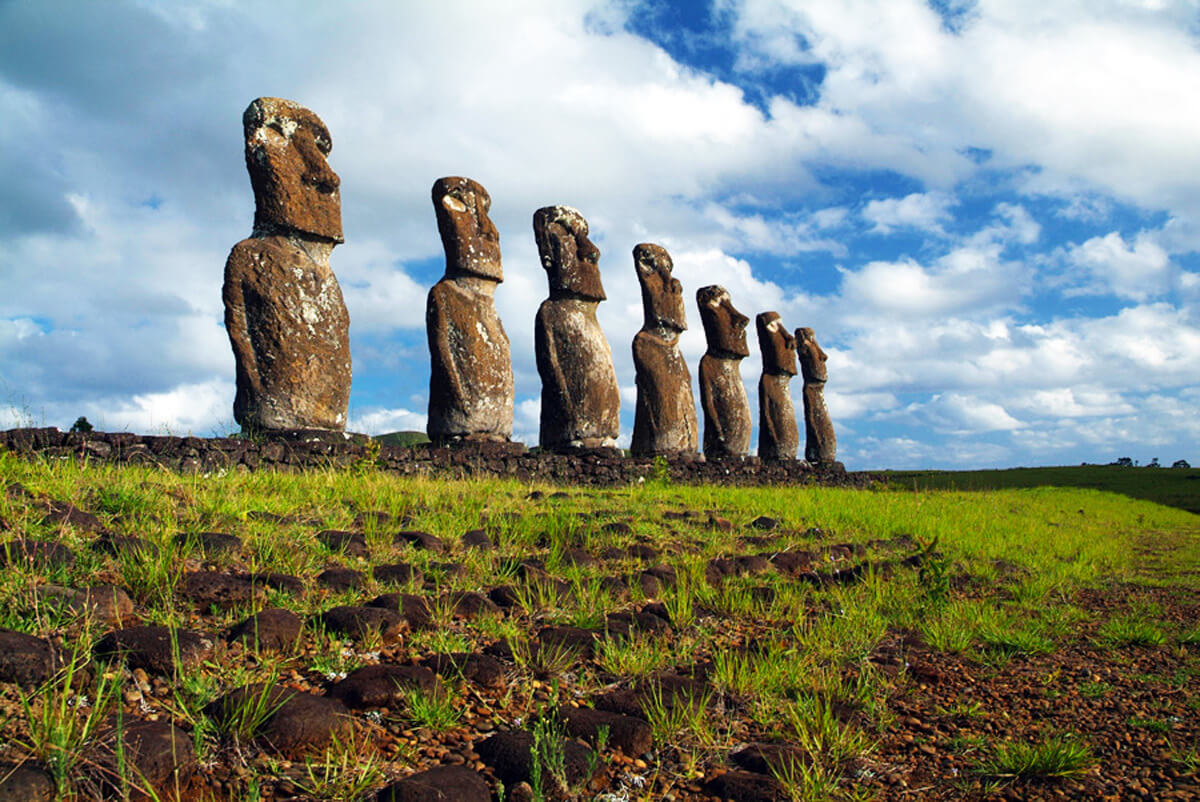 Easter Island, the most isolated inhabited islands in the world, was annexed to Chile in 1888. The island got the constitutional status in 2007. The distinctive feature of Easter Island is that it has an array of 900 giant stone figures.

The colossal statue of Jesus Christ is the largest Art Deco type sculpture. The Christ the Redeemer was built between 1922 and 1931 by Brazilian engineer Heitor da Silva Costa. 98 feet tall statue stands atop the summit of mountain Corcovado, Rio De Jeneiro, Brazil. 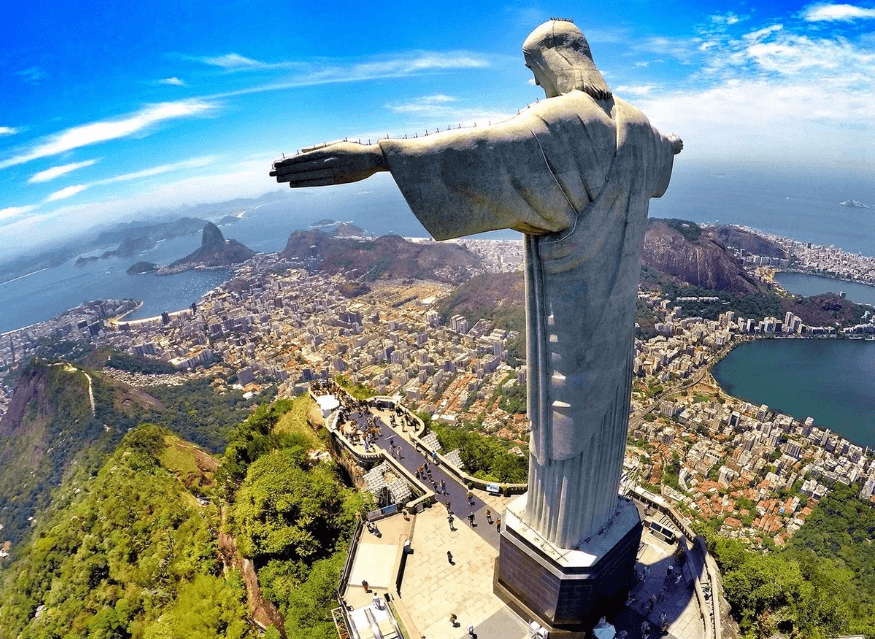 The statue, made of concrete clad and soapstone tiles, is placed on a pedestal base, which is 26 feet tall. 92 feet tall arms are outstretched horizontally. The statue has become a symbol of Christianity throughout the world. It is a cultural icon of Brazil and Rio de Jeneiro.

Persepolis, an ancient capital of the Achaemenid Empire, was founded by Darius in 518 B.C. It is 50 km. away from the city of Shiraz, Iran. Being inspired by Mesopotamium models, the king built an impressive palace complex on half-artificial, half-natural terrace. This unique archeological site was declared as the UNESCO World Heritage site. 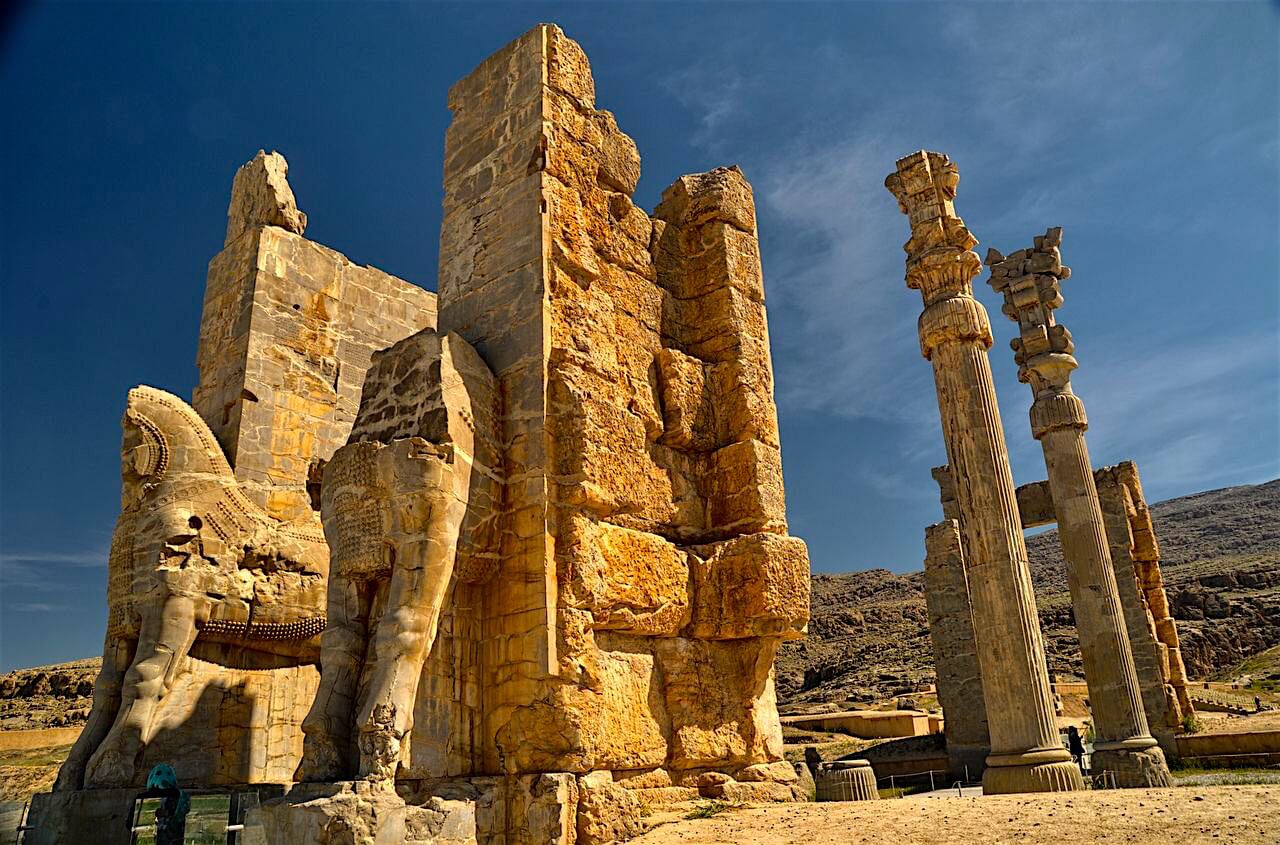 The complex had nine structures namely the Apanda, Council hall, Palace of Darius I, Treasury, Throne hall, Palace of Xerex I, Harem of Xerex I, Tomb of the King and Gate of all nations. The Persepolis was the safest city in Persia until it was plundered by Alexander the Great in 330 B.C. Excavation started in 1931 CE. 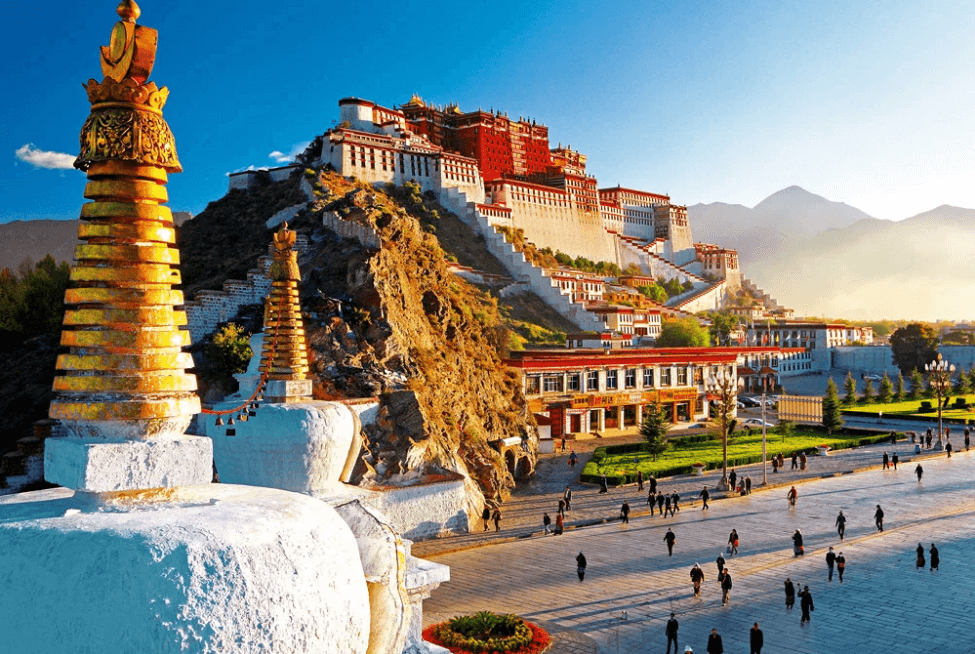 Since the 7th century, the Potala Palace has been the winter palace of Dalai Lama. This palace plays a central role in the administration of Tibet. It symbolizes Tibetan Buddhism. The Potala Palace comprises of 10,000 painted scrolls, thousands of statues and 698 murals. There are the tombs of eight dalai Lamas.

Timing: morning to 5:00p.m. allowing an hour visit to each person

Alhambra is a palace and fortress built by Moorish monarchs of Granada, Spain. The outer walls of Alhambra are built from the red coloured rammed earth. It was constructed between 1238 and 1358 during the rule of Ibn-Al-Ahmar, founder of Nasrid dynasty.

A part of Alhambra was destroyed by Charles V to build an Italianate palace. Some of its towers are destroyed during Peninsular War.

In 1821, an earthquake caused damage to Alhambra. An extensive repair program started from 1828 and continued through the 21st century.

Acropolis of Athens symbolizes classical spirit and civilization. The ancient citadel is situated on a rocky outcrop above the Athens city. It is considered as one of the greatest architectural and artistic complexes in the world. It consists of the ruins of several ancient buildings of historical significance.

After gaining victory against Persia and the 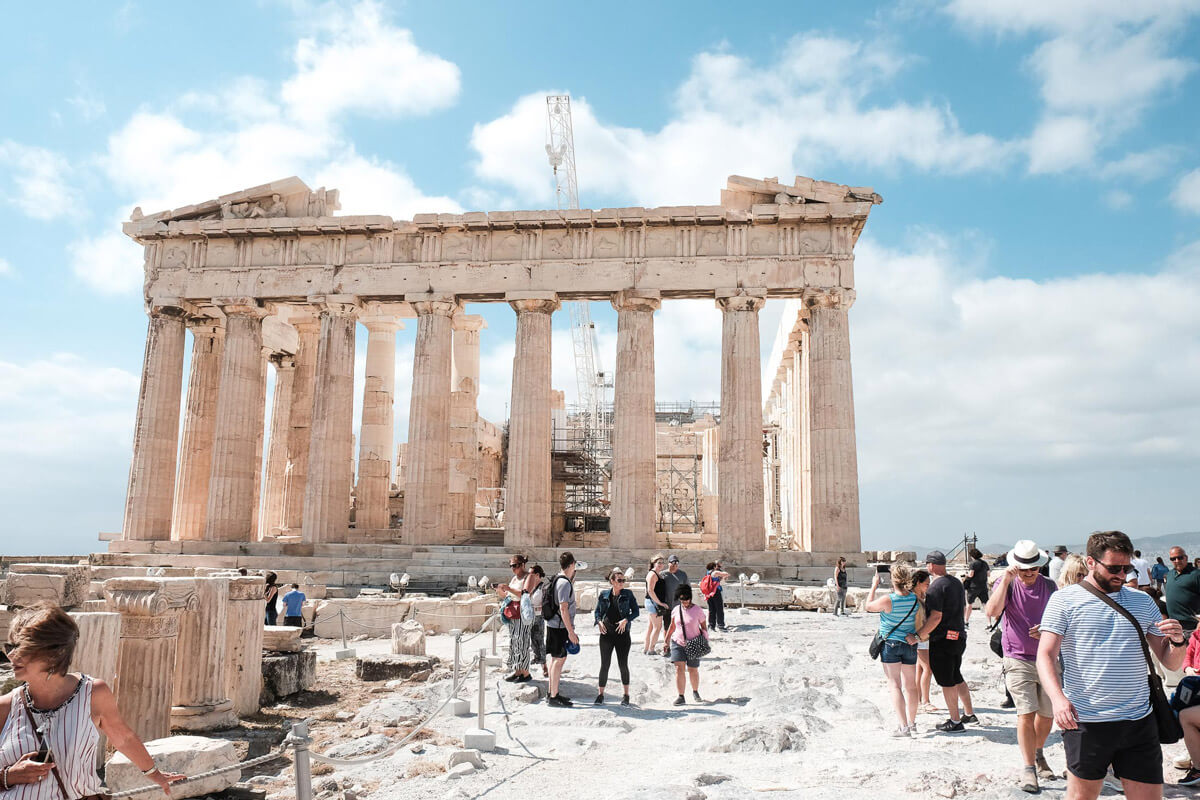 establishment of democracy, Athens became the most important city-state of the ancient world. In second half of 5th century bc, a group of artists under sculptor Pheidias transformed the rocky hill into a unique monument. The monuments include the Parthenon, Erechtheon, the Porpylaea, the entrance to Acropolis and the Athena Nike.

The Parthenon temple on the Athenian Acropolis was constructed in mid-5th century B.C.  This temple is dedicated to godess Athena Parthenos. The Parthenon is the centre piece of the Acropolis in Athens. It is the result of the development of the Doric order. 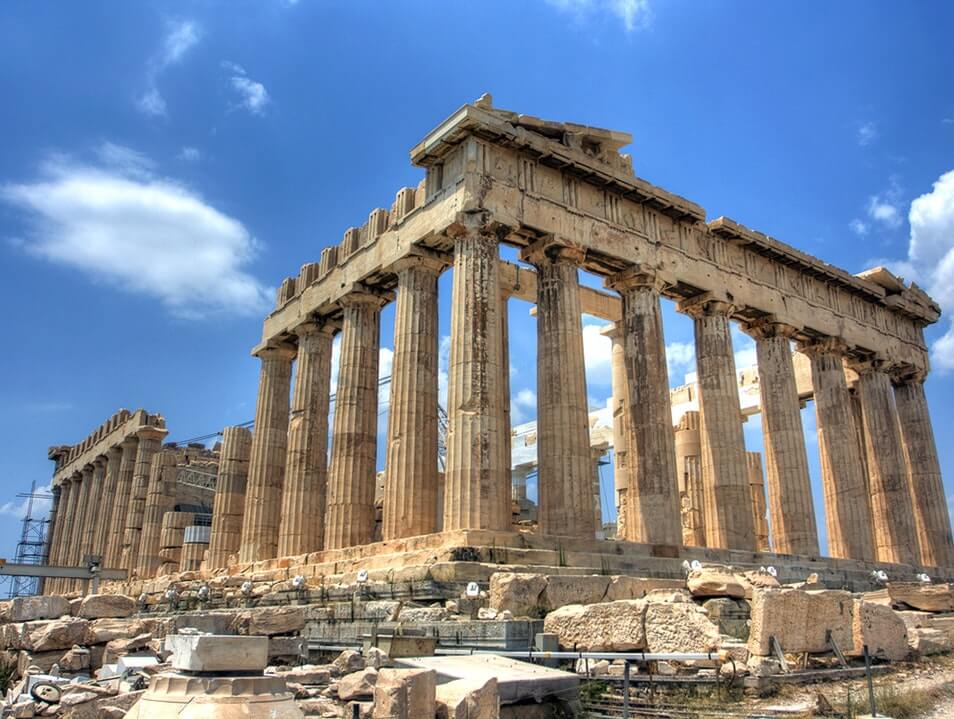 The Parthrnon temple is regarded as a tribute to Athen’s victory in the Greco- Persian wars. It is famous for its precise construction and sculptures. The Parthenon is a symbol of Athenian Democracy.

Though initially it was a religious building, later it was transformed into a store to Ottoman’s ammunition during a war. During Greece War of Independence, the Parthenon served as an army barrack. Now, it is a tourist spot.

Luxury train to take a Ride in India